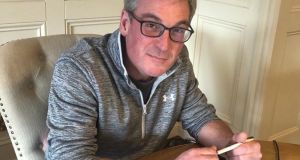 Dr Fergal Ruane tested positive on Friday of last week and has continued to work by phone. Photograph: Stephen Collins/Collins

A GP in Belmullet, Co Mayo, who has Covid-19 himself, has been unable to keep up with the large numbers of local people testing positive for the disease.

Dr Fergal Ruane, who has continued to work by phone, has referred so many people to be tested he has stopped counting them.

“I have just pages upon pages on my referral list. I am not even sure how many of my own patients are positive,” he said.

On Friday morning, two thirds of Dr Ruane’s calls were Covid-related. When he spoke to The Irish Times, he had already sent one man to hospital and was about to call back another man to send him there too.

“You have got a huge number like that. The bulk of people come out of it and they are well but when people go down, they go down in a big way,” he said.

“There is fear around and people kind of dread - I do anyway - what is going to happen in the morning, who is going to be sick, which of their neighbours has got sick now.”

Dr Ruane estimates that there have been about 10 deaths from the disease in the locality recently.

He puts the hotspot of infection in Belmullet down to a “perfect storm” of increased socialisation and locals returning from overseas, particularly Britain, for Christmas.

“There was definitely an influx of people from outside the area, mostly coming over from the UK, unchecked and not isolating, and some people making no secret of the fact that they were not isolating,” he said.

“There were some people coming in who had had tests over in the UK and weren’t waiting for results. There was too much socialising going on.”

However, Dr Ruane said the vast majority of local people were careful over Christmas and that the numbers who came home to Belmullet from Britain “who didn’t behave themselves when they came home was small.”

Dr Ruane tested positive on Friday of last week. He praised his staff for helping him when he was juggling the illness and calls with patients of his Belmullet practice on Monday and Tuesday.

“I could manage two phonecalls before I would have to take a break. You are just absolutely debilitated with it. I am coming out of it now,” he said.

Meanwhile, Monaghan-based doctor, Dr Ilona Duffy, told RTÉ’s Morning Ireland programme she believed that the speed at which the virus is spreading was “definitely related to the new UK variant”. Monaghan has also experienced a high rate of Covid-19 infection.

Dr Duffy said during previous outbreaks older members of the community, especially those in residential units, were being impacted more “but this time it’s absolutely in the community.

“It’s absolutely people who are a lot younger, those who we count as middle aged - 50s and 60s - they’re the people we’re seeing deteriorating and presenting in our Covid hubs.

“This virus has changed, it definitely is more endemic in our communities and it’s spreading faster, ripping through families, through workplaces - this is creating huge problems because we’re not getting a handle on it.”

She added that the current lockdown was “very different”.

“We are all meant to be working from home, we’re all meant to be avoiding meeting each other. You just have to walk out into Monaghan town at lunch time and coming home in the evenings to see much higher rates of traffic, much higher flow of people in the streets and in the shops compared to last April and May.

“While people are adhering better to the guidelines, they’re still not adhering fully”.