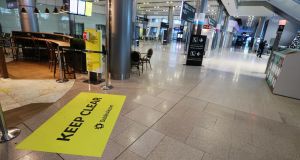 An almost empty arrivals hall in Terminal 2 of Dublin Airport: Since last week, all passengers arriving into the State must produce a negative test result. Photograph: Brian Lawless/ PA Wire

Government Ministers will consider proposals to introduce mandatory quarantine for passengers arriving into the State who do not have a valid PCR test showing they are Covid negative.

The Cabinet is coming under increasing pressure to introduce tougher restrictions after the State’s public health team said existing pre-flight tests were not enough and the EU mulls a ban on non-essential travel between member states.

The Cabinet will meet on Tuesday and move to extend Level 5 restrictions until late February at least as the virus continues to spread in the State and hospitals continue to be under severe pressure.

A Government source said “nothing is being ruled out” in relation to tightening the rules on incoming travel. Among the options being explored are regulations that will require a passenger without a PCR test to go into compulsory quarantine in a designated location, such as a hotel, for 14 days or until they can show a clear PCR test.

There are growing concerns around the spread of three new variants of Covid-19 through travel, as figures show more than 3,000 people from South Africa and Brazil, and 37,000 from the UK flew into the State in the five weeks to January 11th.

“There’s a lot of concern about the variants across the member states, people are really worried about it,” Taoiseach Micheál Martin told the Irish Times following a video conference of EU leaders.

The National Public Health Emergency Team (Nphet) on Thursday night said the UK variant accounted for more than 60 per cent of samples recently tested. It reported 51 more deaths and 2608 new cases of the disease. The European Centre for Disease Prevention and Control (ECDC) on Thursday raised the risk of new variants to high to very high and warned that the greater infectiousness of the UK variant was likely to lead to “higher hospitalisation and death rates”.

A system which began last week required the production of a negative test result for all passengers arriving into the State. However, while failure to produce the result is a criminal offence, gardaí do not have the power to stop the person from continuing their journey into the State.

The sources admitted there were divided views within the Cabinet, and the Department of Justice was cautious. Tánaiste Leo Varadkar also expressed reservations on Thursday, saying mandatory quarantine would be disproportionate and not workable in the State because of the open border. Government sources said such a regime may encounter legal and constitutional difficulties.

The Department of Justice has said the number of passengers arriving without PCR test results has fallen to very small numbers. Carriers are also obliged to refuse boarding to passengers if they fail to produce a test result.

In a letter to the Government released on Thursday, Nphet said “further measures should be adopted” and a pre-travel test alone was not sufficiently robust for the prevention of disease importation”. In the January 14th letter, it also recommended the removal of “discretion” in relation to the restriction of movements and PCR-testing post-arrival.

At a briefing on Thursday night, chief medical officer Dr Tony Holohan criticised airlines for advertising holiday flights on the basis that vaccines would soon be available for travellers.

There is mounting pressure for a ban on non-essential travel between EU members. EU leaders met on Thursday in a bid to co-ordinate on the issue, amid growing calls from member states for stricter travel curbs to avoid travel contributing to hospitals becoming overwhelmed before vaccines are widely rolled out.

More discussion is needed to identify measures that all 27 can agree to. “There’s a bit more work to be done on that... but it’s all heading in one direction,” Mr Martin said. “We’re very strong that supply chains have to be protected in terms of any travel restrictions.”

In the meantime, some member states may press ahead with their own new measures at their borders. Germany and Belgium have led calls for tougher restrictions to curb non-essential travel, though the idea of border checks has met resistance from member states that are dependent on tourism or have a high number of cross-border commuters.