Government was in ‘exploratory and embryonic’ talks with Britain 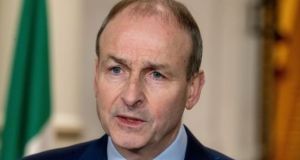 Taoiseach Micheál Martin confirmed that the Government was looking at additional travel and quarantine restrictions due to concerns about emerging variants of the disease. Photograph: Julien Behal

Taoiseach Micheál Martin has played down suggestions that the Government was considering a “two-island solution” to travel restrictions and quarantine with the UK government.

Mr Martin told reporters on Friday afternoon that ministers had held talks with their UK counterparts on joint approaches but that the discussions were “very exploratory and very embryonic”.

He was speaking after Green Party TD Ossian Smyth said a new level of Anglo-Irish cooperation was required.

A majority of infections in the Republic were now the UK strain, said the Government TD, and “that just goes to show how ineffective it is to bring in controls on one part of the island of Ireland that don’t apply across the rest.

“We need a two-island solution rather than just our country bringing in measures that then lead to flow from the North, if you’re coming to Ireland and facing a two-week mandatory quarantine in a hotel in Dublin and your alternative is a two-hour drive from Belfast, nobody is going to go through Dublin and then we’ll have even less visibility of who has come into the country,” Mr Smyth told the Today with Claire Byrne Show on RTÉ Radio One.

Asked about the feasibility of the two-island solution, Mr Martin said “it could be pursued. There’s lots of issues around implementation and delivery on that.” But he played down expectations of an imminent agreement.

Asked if he had spoken to British prime minister Boris Johnson about the idea, he said: “Yeah. That work… we’ll have further discussions. I know the Minister for Health has been talking to [British] Minister [Matt] Hancock about that; I know the two transport ministers have been talking about it. I’ve spoken to Arlene Foster and Michelle O’Neill about this last week, we had a meeting.”

Mr Martin confirmed that the Government was looking at additional travel and quarantine restrictions due to concerns about emerging variants of the disease.

“Obviously there are complications – always has been – because of our relationship with the United Kingdom; with the border, with the North, and also the fact that we’re integrated into the European economic system. I suppose, it’s more easy to call for a quarantine than to deliver it comprehensively. And a lot of people coming back are Irish people coming back into the country,” he said.

Mr Martin acknowledged that the difference in the approach between Dublin and Belfast could diminish the impact of any new restrictions.

Mr Martin also confirmed that there would be no prospect of any easing of restrictions at the beginning of February.

The Cabinet Covid committee would meet next Monday and the Cabinet would make decisions on Tuesday, he said.

“Certainly, there is no talk at the moment in terms of any relaxation or reversing of restrictions at the end of this month.”

The Cabinet is coming under increasing pressure to introduce tougher restrictions after the State’s public health team said existing pre-flight tests were not enough and the EU mulls a ban on non-essential travel between member states.

The Cabinet will meet on Tuesday and is expected to extend Level 5 restrictions until late February at least as case numbers stay extremely high, the State’s hospitals remain under severe pressure and schools stay closed.

TheIrish Times reported on Friday that Ministers will also consider proposals to introduce mandatory quarantine for passengers arriving into the State who do not have a valid PCR test showing they are Covid negative.

The move will be considered after the issue was raised by the National Public Health Emergency Team (Nphet) and Chief Medical Officer Dr Tony Holohan in a letter to Government published this week.

Earlier, the HSE’s chief clinical officer Dr Colm Henry said that current Covid-19 transmission levels are too high for schools to reopen. Speaking on RTÉ radio’s Morning Ireland, Dr Henry said he hoped there would be “some approach” which would give priority status to “certain elements of the education sector”.

It was “tragic” to be talking about schools remaining closed, he said. “We learned from the first surge about how much harm was done to children, especially early school children, particularly in special needs environments, when there was a pause in education.”

Nobody wanted to see the schools’ closure being protracted because of what had happened “the first time.”

But transmission levels at the moment are frankly too high, he said. They needed to be reduced “to much lower levels” before any additional risk of “mixing crowds or a mixing of people in school settings”.

It was his hope that “certain elements” of education, especially special needs, could return because of the impact such closures had previously.

According to the European Centre for Disease Prevention and control, the 14-day incidence rate of coronavirus per 100,000 population in Ireland ranged from 30.5 on September 1st to 85.5 on September 30th. The current rate, reported by Nphet on Thursday night, is 1140.7.

Meanwhile, World Health Organisation (WHO) spokeswoman Dr Margaret Harris has warned that the new variants of Covid-19 which are more transmissible means that the public will have to be even more stringent about reducing contacts, mask wearing, distancing, hand washing - and tracking the virus.

While the new variants do not appear to cause more severe illness, some appear to be able to spread more quickly and effectively, she told RTÉ Radio One’s Morning Ireland.

Each country should conduct a full risk assessment of what is going on in its communities, she said. At present Ireland had “intense, widespread transmission” so bringing in any further cases needed to be avoided at a time when the health system was “absolutely stretched”.

While vaccines prevented people from getting sick, it was not yet known if they prevented transmission of the virus, she warned.

This meant that restriction measures would need to continue. “We will know more about whether or not the vaccine protects from transmission as we follow all the people who have been vaccinated and track all the data,” Dr Harris said.

Separately, the European Union is heading towards tougher restrictions on travel both from outside and within the bloc amid rising concerns that new variants of Covid-19 could scupper hopes of reining in the pandemic through vaccination campaigns.

“There’s a lot of concern about the variants across the member states, people are really worried about it,” Taoiseach Micheál Martin told the Irish Times following a video conference of EU leaders.

More discussion is needed to identify measures that all 27 can agree to. “There’s a bit more work to be done on that...but it’s all heading in one direction,” Mr Martin said. “We’re very strong that supply chains have to be protected in terms of any travel restrictions.”

In the meantime, some member states may press ahead with their own new measures at their borders. Germany and Belgium have led calls for tougher restrictions to curb non-essential travel, though the idea of border checks has met resistance from member states that are dependent on tourism or have a high number of cross-border commuters.

But an expectation that new variants may yet emerge that are resistant to vaccines is fuelling a sense that Europe is in a race against time.

In addition, the European Centre for Disease Prevention and Control has warned that a new more infectious strain of Covid-19 that first arose in Britain could cause a surge in hospitalisations and deaths if it takes hold across the continent.

Member states committed to step up genomic sequencing to identify strains as they emerge.

Microbiologist Professor James McInerney has warned that unless Ireland seals its borders and introduces rigorous quarantining measure there will be repeated lockdowns for the remainder of the year and maybe even into 2022.

It was obvious that Ireland needed to adopt the New Zealand approach and seal its borders, he told RTÉ radio’s Morning Ireland.