Greta Thunberg’s voyage is admirable but not practical 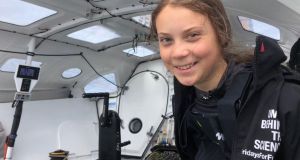 Pierre Casiraghi, the Monacan royal who is sailing environmental activist Greta Thunberg across the Atlantic to attend the UN climate summits, told The Times recently that “we are probably one of the few boats in the world that is totally zero fossil fuel”. While this endorsement qualified his yacht for Thunberg’s purposes, it also highlighted its one glaring shortcoming: inimitability. Thunberg’s fellow travellers, no matter how eco-minded, will struggle to follow her lead. The 60ft racing yacht was recently upgraded to be carbon neutral, with solar panels and underwater turbines. Thunberg got our attention, but the question is whether she might have done more with it.

She has millions of online followers – many of whom are keen to help the environment and ostensibly willing to go to some effort to achieve this – but most of us can’t spend two weeks in transit or call a prince for a lift. Thunberg acknowledged the journey’s infeasibility herself, saying: “Taking a boat to North America is basically impossible. I have had countless people helping me . . .”

Environmentalism has been criticised for seeming elitist, and Thunberg’s sail risks playing into this problem. Travelling as a guest aboard a working boat – while the crew sleep only two hours at a time – separates her even further from reality. She’ll stay carbon neutral, which is commendable, but she wants to see an 80 per cent reduction of emissions in the EU by 2030, and she can’t do it alone.

She had an opportunity to demonstrate a practical, imitable solution, but instead, she relied on her celebrity to make a point

With many of us likely to continue flying, at least in the short term, despite the flygskam (flight shame) Thunberg mentions, it might have been a better use of her platform to show us how to do it more conscientiously or to find viable alternatives. Her refusal to board a plane is understandable given what she stands for. Still, the strictness of this rectitude calls to mind my Catholic high school, which declined to teach sex education on the principle of abstinence.

The idea here is not to drag the young activist down into the carbon-emitting muck with us. There’s something to be said for setting an unshakable example and hoping people will find a way to meet you there. But Thunberg’s desire to attend the summits granted her a moment of striking relatability: even people who would never dream of using aluminium foil or a plastic toothbrush or a takeaway coffee cup still want to cross an ocean sometimes. She had an opportunity to demonstrate a practical, imitable solution, but instead, she relied on her celebrity to make a point. The extreme and elusive approach seems a mismatch for the down-to-earth girl we’ve come to know, and it risks alienating her from us.

Suppose Thunberg had flown, but travelled economy, non-stop, and during daylight hours – all of which have been proven to reduce carbon output. Suppose she reported on which airlines are most efficient, or have started using biofuels, or have otherwise demonstrated commitment to the environmental agenda. She could have flown standby, refusing to travel until a flight had an empty seat. Amid consumer wariness, she could have offered her voice on carbon offsets and which companies are the most reputable. She could have published a plan to offset the emissions generated by her seat on the flight, not only to remain carbon neutral but also to give a real-world illustration of the emission/offset balance. She could have started a wider conversation about the need for affordable transatlantic passage on low-carbon vessels. Or, perhaps most radically, she could have refused to travel at all, attending the summits via video conference and proving to multinational corporations that collaboration can indeed be achieved this way. After all, business-class travel has been proven to generate three times more carbon emissions than economy.

By sailing, Thunberg has relieved her flygskam, and her resolve is inspiring. But it’s more than inspiration that we need. As millions watch to see what she will do next, I implore her to think about the example she sets on the way back. I hope she will give us something we can not only applaud, but also learn from and emulate.

Kathryn Phelan is a writer based in Dublin