Anxiety may be alleviated by changing gut bacteria, study claims 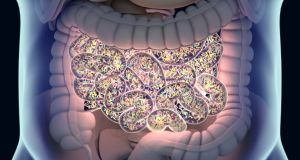 Researchers from Shanghai University’s school of medicine set out to investigate if there was evidence to support improvement of anxiety symptoms by regulating intestinal microbiota. Photograph: iStock

Anxiety may be alleviated by changing a person’s gut bacteria, new research suggests.

Interventions such as dietary changes work better than using probiotics, but both approaches are effective, the review of studies published in the journal, General Psychiatry, suggests.

Studies have shown that as many as one-third of people will be affected by anxiety symptoms during their lifetime.

Increasingly, research has indicated that gut microbiota – the trillions of micro-organisms in the gut which perform important functions in the immune system and metabolism by providing essential inflammatory mediators, nutrients and vitamins – can help regulate brain function.

A team of researchers from Shanghai University’s school of medicine set out to investigate if there was evidence to support improvement of anxiety symptoms by regulating intestinal microbiota.

They reviewed 21 studies that had looked at 1,503 people collectively. Fourteen studies had chosen probiotics as interventions to regulate intestinal microbiota while seven chose non-probiotic ways, such as adjusting daily diets.

Probiotics are living organisms found naturally in some foods that are also known as “good” or “friendly” bacteria because they fight against harmful bacteria and prevent them from settling in the gut.

Overall, 11 of the 21 studies showed a positive effect on anxiety symptoms by regulating intestinal microbiota.

Also, because some studies introduced different types of probiotics, these could have fought against each other to work effectively, and many of the intervention times used might have been too short to significantly increase the abundance of the imported bacteria.

As an observational study, it does not establish causation.