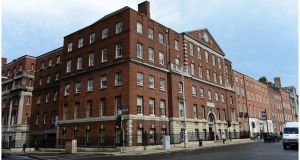 The couple claims they were told there was no need for them to wait for a second test result before proceeding with a termination. Photograph: Bryan O’Brien / The Irish Times

A couple who terminated a pregnancy after misleading test results suggested a fatal foetal abnormality are to make a formal complaint to the Data Protection Commissioner about the National Maternity Hospital.

The couple claims key documents were omitted when they asked the hospital for their file after it emerged the baby they terminated was healthy.

An official form certifying that a termination had been carried out, as prescribed under abortion legislation that came into effect at the start of the year, was completed by two obstetricians but was not included in the file.

It is believed the hospital’s general practice is not to include the form in files for reasons of confidentiality.

Caoimhe Haughey, the couple’s solicitor, said she has been instructed to lodge a complaint with the commissioner over the omission of documents from the file. She said she was still waiting for other documents.

The couple says they were told there was no need for them to wait for a second test result before proceeding with a termination.

After an initial test indicated their baby had a fatal foetal anomaly, they were faced with a decision of whether to proceed with a termination or to await the result of a second test, which had been performed on the same tissue sample. This takes another nine days to arrive after the result of the first test.

The couple says they were told by hospital staff there was no need to wait for the second test and that the matter was “black and white”.

They say they were told there was “no hope” and that the next stage of testing “would make no difference”.

Ms Haughey has queried the fact that no geneticist was involved in discussions at this stage.

Institute of Obstetricians guidelines prepared last year say where termination of pregnancy is being considered in cases of fatal foetal anomaly, a foetal medicine specialist should be involved in the antenatal diagnosis. Geneticists and other specialist colleagues should be consulted “as necessary”.

“All foetal medicine units should have timely access to clinical genetics specialists who may advise further on the type of testing necessary depending on the ultrasound presentation/family history and previous history.”

There are no national guidelines in Ireland on prenatal testing but UK guidelines suggest confirmatory tests should be carried out before terminations are undertaken. This is what happened in a similar case at the Rotunda Hospital earlier this year.

At a meeting last month with the obstetrician after the termination had been carried out, the couple says they were not told directly their baby was healthy but gleaned this information afterwards from the test results, which had been provided to them in an envelope.

The discrepancy in the two tests performed on the baby involves a phenomenon known as mosaicism, where the genetic make-up of the placenta, which was sampled for the test, differs from that of the foetus.

In this case, the first test produced a false positive, in that it showed signs of a foetal anomaly known as Edwards’ syndrome, whereas the baby had no anomaly, as the second test showed.

The mother, who had researched the issues involved extensively, says she specifically raised the issue of mosaicism, but says her concerns were dismissed.

The couple says they were “actively” told not to wait and that there was no need for amniocentesis – a further test that can be done later in pregnancy. Amniocentesis tests cells directly from the foetus.

They maintain they were prepared to wait for the result of a further test but were told the diagnosis from the initial test was “conclusive”.

They say they asked: “Is there any hope? Is there anything else a test could show?” but were told there wasn’t and that their baby had “full-blown” Trisomy 18, or Edwards’ syndrome.

After learning of the discrepancy, the father initially complained to the hospital but was dissatisfied with its response and later sought legal advice from Ms Haughey.

The hospital said: “The National Maternity Hospital does not disclose the content of any meeting between doctors and patients. We always respect patient confidentiality.”