How problems addressed remains key to progress in health 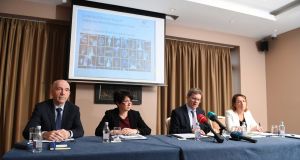 The review of more than 46,000 scans carried out at University Hospital Kerry over a 15-month period is the biggest audit of its kind undertaken in the Irish health system.

It appears to have been conducted with commendable speed and thoroughness, with a strong focus on patient communication. Following on from a well-run review of colonoscopies in Wexford hospital last year after errors emerged, it shows the health system can up its game in relation to the investigation and follow-up of issues when they are uncovered.

Issues will always arise with the work of individual health professionals – the HSE employs well over 100,000 staff – and errors will crop up, some of them avoidable, some not. What matters is how quickly these issues are spotted, what actions are taken to ascertain the extent of the problems and how they are remedied.

In Kerry, concerns had been raised about the quality of some reports filed by the consultant radiologist, and about that person’s workload. The radiologist appears to have been processing scans at a rate of more than 3,000 a month. This is much higher than the standard number dealt by a consultant, which would rarely exceed 12,500-15,000 a year.

The report says these issues were being addressed by hospital management at the time the decision was made to carry out the review last year. With the benefit of hindsight, it is regrettable that action was not taken earlier.

The report clearly labels at least some of the misreported scans as “serious diagnostic errors” and says 11 patients suffered delayed diagnosis which had a serious impact on their health. Four of the patients died but the report does not say whether this could have been avoided if the scans had been reported correctly in the first place.

Radiology is not infallible, as the report points out: “The interpretation of a radiological study is not a binary process; the answer is not always normal or abnormal, cancer or not”.

The issue of hindsight bias in an audit is mentioned, as it has been in the context of the CervicalCheck controversy. Those who carried out the review were aware of the concerns raised over these scans, and this may have affected their interpretations.

Harm was clearly done to 11 patients but the report says this is not exclusively attributable to the radiologist whose work was reviewed. “This would be a matter for the Medical Council and therefore is outside the remit of the review team.”