Abortion guidelines for doctors will not be ready for rollout date

Peter Boylan says ‘inevitably, there will be problems’ and nobody should expect ‘perfection’ from service 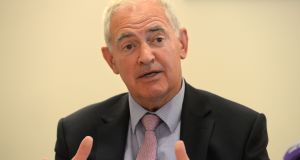 Dr Peter Boylan said expectations had to be kept in context, and that women in other countries often had to travel “hundreds of miles” to access such services. Photograph: Dara Mac Dónaill

Revised ethical guidelines for doctors on abortion and conscientious objection will not be ready in time for the planned rollout of termination services next month, it has emerged.

The Medical Council believes it is better to get the guidelines right rather than to rush them in time for the Government’s deadline for the introduction of abortion on January 1st, its president, Dr Rita Doyle, told a closed meeting of GPs.

This means existing guidelines, the provisions of which on conscientious objection have been criticised by some doctors, will apply to the service until they are updated.

The consultant appointed by the Government to oversee the introduction of the service has said abortion will be available “in some form” in all of the State’s 19 maternity units from January.

However, Dr Peter Boylan warned that “inevitably, there will be problems and nobody should expect perfection” at the start.

The main thing is that women will not have to travel to England any more, and will be able to access services here

Although dozens of family doctors walked out of Sunday’s meeting of the Irish College of General Practitioners (ICGP) claiming plans for the new service were in “serious crisis”, Dr Boylan insisted “the pieces are falling into place” for the provision of terminations both in the community and in hospitals.

But he warned expectations had to be kept in context, and pointed out that women in other countries often had to travel “hundreds of miles” to access such services. Terminations would be provided in locations where it was most clinically appropriate, he said.

In some smaller units, the number of terminations could be as low as 1-2 per week, and skilling issues could arise, he said.

“The main thing is that women will not have to travel to England any more, and will be able to access services here. Doctors will be able to have open and honest conversations with their patients, with no hypocrisy involved.”

Dr Boylan said that because of the Christmas/New Year break and the three-day cooling-off rule that will apply to a woman seeking a termination, it was likely to be the second week of January before the first abortions took place under the new system.

The deadline for submissions to the Medical Council on its revision of ethical guidelines was last Sunday. A spokesman said its priority was to ensure the guidance provided to doctors was “inclusive, relevant and useful”.

The ICGP, which was criticised by members for refusing to accept motions at an extraordinary general meeting at the weekend, said it had communicated members’ concerns to the council and planned to contact it was “further feedback” following the egm.

An information meeting for doctors on providing the service which was due to take place at University Maternity Hospital Limerick on Tuesday evening has been cancelled after anti-abortion activists planned to hold a vigil outside.

Cork GP Mike Thompson, one of the Start group of pro-choice doctors, said the decision was taken because of “security concerns” and objections to the use of State facilities for the meeting in advance of the new abortion law being passed.