Boylan adamant abortion services should go ahead in New Year

Medic responds to complaints from doctors that process is being rushed 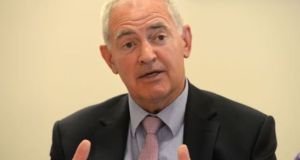 Dr Peter Boylan said that if the service is not introduced women will still have to go to the UK for terminations and any delay would not be fair. Photograph: Dara Mac Dónaill

Dr Peter Boylan, who was appointed by Minister for Health Simon Harris to assist the HSE with the implementation of abortion services, is adamant that the service should go ahead on January 1st.

He said that while he acknowledges the service will not be perfect, “if we had to wait for a perfect service for doctors it could take years”. To suggest that women would have to wait until the service was perfect would be unfair to women, he said.

Dr Boylan was speaking on Newstalk Breakfast in response to an opinion piece in Friday’s edition of The Irish Times by Professor Chris Fitzpatrick, in which he claimed that rushing the service into operation posed “a serious threat to the health and wellbeing of women”.

Prof Fitzpatrick said that he will participate in the provision of this service, but only when it is safe to do so. “At present, I am operating in an ‘information vacuum’.

However, Dr Boylan said that if the service is not introduced women will still have to go to the UK for terminations and any delay would not be fair on women.

“The guidelines have been written for six months,” he said.

Dr Boylan pointed out that the strands of the new service include the prescribing of abortion pills. “Doctors are well able to write a prescription,” he said, adding that they would not require training to do so.

For later-term terminations in cases of fatal foetal abnormality, or cases where there is a danger to the life of the mother, the procedures are very clear, he said, as they have been in place for five years under the Protection of Life during Pregnancy Act.

However, leading obstetricians are also seeking to have the introduction of abortion delayed “because of risks to patient safety due to inadequate preparation” for it.

Some members of the Institute of Obstetricians and Gynaecologists, the national professional and training body, have called for an extraordinary general meeting of the organisation to debate a motion that the implementation of abortion legislation “cannot” commence next month and “should not take place until these risks are addressed”.

“There are very serious concerns by many members that it will be highly unsafe to commence this service in January and that legislation should not be implemented until it is safe to do,” said one of the signatories to the motion.

Dr Boylan said that suggestions that abortion services should be introduced on a pilot programme for one area are “not on.”

“There is no area of healthcare without problems.”

In a statement, the Institute said it was developing draft guidelines in anticipation of the introduction of legislation to allow for termination of pregnancy, which was near completion.

“It must be emphasized that the Institute has no role, authority or responsibility in the actual delivery of obstetric and gynaecological services which is the remit of the HSE.