Airport arrivals on quarantining: ‘Fourteen days for me is fine. There’s an end date’ 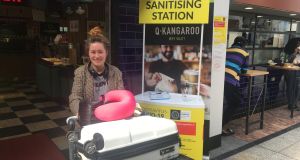 Cork student Clara Hughes: Arriving home at Dublin Airport, she is not concerned about new laws requiring people to tell the State where they will be for two weeks of quarantine. Photograph: Mark Hilliard

Pushing her luggage trolley through a near-abandoned Dublin Airport terminal on Thursday afternoon, Clara Hughes had become one of the first arrivals legally obliged to notify the State of her whereabouts for the next two weeks.

But like most of the passengers trickling through the arrivals hall towards mandatory quarantine, the 26-year-old student is not put out. Arriving home was far more important than worrying about this sudden, unfamiliar State surveillance.

“Honestly I actually don’t have a problem with it. I am someone who values privacy, however in this case I kind of like the idea in terms of looking after yourself, your family,” she says.

“Fourteen days for me is fine, there’s an end date.”

Filling out forms telling the authorities where you are going to be for your self-imposed isolation after arriving in the country is not new. It has been in place for weeks. What is new is that, since Thursday, it is the law.

Anyone who refuses or submits false information can face a fine of up to €2,500 or six months in prison. It is not your typical céad míle fáilte, but these are not typical times.

There is a sense that travellers are buying into the effort. Passengers are asked to fill out the forms on the plane or in a designated area before clearing passport control. No one we spoke to noticed any conspicuous objections from fellow travellers on sparsely occupied aircraft.

Clara pushes her trolley back into the “ghost town” airport she arrived in. In the terminal a few – mainly masked – passengers come and go. The familiar sound of jet engines has been replaced by the drills of builders renovating the hall.

Traffic has been decimated. Many of the handful of passenger flights – there were eight between 3pm and 9.30pm on Thursday and two were internal – arrive early and those on board scatter quickly.

On the glass gangway connecting the arrival halls, Oisín Green is philosophical about the need to sign over details of his personal movements. He fills out the form obediently, even though as a freight pilot he regularly passes through the airport.

He noticed a slight delay at passport control as officials pored over people’s declarations but everyone seemed happy enough. Does he mind the intrusion?

“Absolutely not. I have got four kids at home and elderly parents. My mother is 86.”

He speaks comfortably through the face mask he has become accustomed to.

“It makes perfect sense to me . . . everyone I think understands there is a reason behind it. Everyone is affected, it’s not just Ireland. Particularly if you are abroad you see it.”

Not far away, Michael walks toward the exit door having just returned from New Zealand, a country widely praised for its approach to handling the outbreak. He too wears a face mask and is not remotely concerned by the upgrade in rules around arrivals.

“That’s how the virus is coming in,” he says nonplussed. “I would just go with the flow, there is no point going against it.”

In Terminal 2 arrivals, a young foreign diplomat hugs his Irish girlfriend. He has been based in Pyongyang in North Korea and, before separating earlier this year, the couple spent a month in quarantine in the city.

He had to be tested to come through China and was negative, he says. “I don’t really mind two weeks of quarantine in the grand scheme,” he reflects. “I think in the more developed world people place quite a bit of faith in the people who run the country. I’m happy to go along. We live in an exceptionally free world, we are very fortunate. I have no worries.”