Choux polish: A Bastible chef’s recipe for a show-stopping pastry 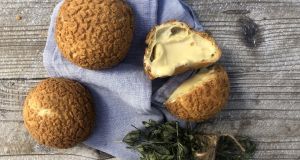 This is the 50th recipe in our Kitchen Cabinet series, and to mark the occasion we have a baking project for the bank-holiday weekend. Ever wondered how pastry chefs get those unusual markings and distinctive tops on choux pastry? Here Cúán Greene, head chef at Bastible, explains how to do it

As a child, I always felt choux pastry was missing something. It was light and airy, and usually contained a delicious centre – pastry cream was always my favourite. But for me it lacked a crunch. This choux has a crispy top of sable biscuit which melts over the choux pastry as it rises.

I add dried sweet woodruff to the pastry cream. This is a star-shaped herb I collect in the woods. It lends a vanilla-like flavour with a faint scent of hay, and appears in Ireland from spring right through to midsummer. Feel free to substitute woodruff with another flavour, or to just use vanilla, but if you can find it, definitely consider giving it a go.

Cúán Greene is head chef at Bastible restaurant in Dublin 8.

2. Place the salt, water, sugar and butter in a saucepan and heat over a medium heat, stirring occasionally. When the water is starting to boil (the butter should be melted at this point), add the flour in one go (do this with the saucepan away from the stove/heat) and vigorously mix the flour in, so that it absorbs all of the water (use a wooden spoon or spatula to do this mixing). When the flour has absorbed the water and it’s forming a dough, return the pan to the stove (at medium heat).

3. Cook the dough for two to five minutes while you mix and move it around in the pan, until you get a dough that pulls away from the sides of the pan, forms oil droplets on the base of the pan, and when you stick a spoon in the dough, it stays upright.

4. Transfer the dough to a bowl, and let it cool down slightly for a few minutes. Using a whisk, mix the dough while gradually adding the lightly beaten eggs, mixing well after each addition. Stop adding eggs immediately when you reach the right consistency (ie a dough with a glossy sheen and pipeable consistency). You may or may not use up all the eggs.

5. Place the choux paste into a piping bag fitted with a 1cm nozzle.

Method
1. Using an electric mixer with a paddle attachment (you can also use a spoon), cream together the butter and sugar until light and fluffy.

2. Turn down the speed to minimum and add the flour and salt, mixing until just incorporated. Take care to not overmix the dough.

3. Roll the dough in between two sheets of parchment paper until about 3mm thick and place in the fridge to harden.

4. When the mixture has hardened, remove the top layer of the parchment. Using a 5cm cookie cutter, cut out circles from the craquelin (you can keep the excess in the freezer for future use). Place the discs between layers of parchment and reserve in the freezer until needed.

Method
1. Place the woodruff and the scraped seeds and pod from the vanilla with the milk into a saucepan. Heat over a medium high until it comes to a simmer. Turn off the heat, and allow the mixture to infuse for two hours.

2. Strain the milk mixture using a sieve, and return to the saucepan. Heat the milk once more over a medium heat.

3. While the milk is being heated, place the sugar, egg yolks, cornflour and salt in a bowl. Place the bowl containing this egg mix on a towel or napkin (to prevent the bowl from slipping while you are whisking, in the next step), and set aside until the milk comes to a simmer.

4. As soon as the milk starts to bubble, remove it from the heat. Slowly pour about half of the hot milk in a thin stream into the egg mix, while whisking constantly to temper the egg mix. Then pour the rest of the milk over the egg mixture, whisk to combine and then place in a clean saucepan.

5. Heat this custard base, over medium heat, while whisking vigorously until it starts to thicken – this should take about one or two minutes. Further cook out for about two minutes.

6. Turn off the heat, add the butter, and whisk to achieve a glossy custard. Transfer the custard into a container or bowl to cool, placing clingfilm in contact with the custard to prevent a skin forming.

To cook the choux
1. Preheat your oven to 195 degrees Celsius. Line baking trays with parchment paper or silicone baking sheets.

2. Pipe choux pastry mounds on the trays (about 5cm in diameter); keep the tip upright and pipe out smooth mounds (piping tip touching the dough surface while you pipe). Gently twist.

3. Carefully place a disc of craquelin on top of each mound and gently press the discs into the choux to make sure they stick and are stable. Allow spacing between each choux as they will triple in size.

4. Bake in a preheated oven for 30 minutes. Do not open the door before the 30 minutes is up, to prevent the pastries from collapsing.

5. After 30 minutes, open the oven door and partially pull out the baking tray. Quickly (but gently), prick each pastry with a sharp toothpick to release any steam inside. Return the tray back to the oven and bake for a further five to 10 minutes, until the pastries are a little darker in colour.

6. Remove the choux pastries from the oven and allow them to cool for a few minutes in a draught-free place.

Filling the choux
1. If you have chosen to make the choux well ahead of time, you can reheat them in an oven preheated to 195 degrees Celsius for five minutes. This will make them crisp once more.

2. Allow them to cool. Using a round tip, punch out a hole in the bottom of each of the cooled choux pastry cases.

3. Fill the choux pastries with the pastry cream, and serve immediately.