Where are all the insects gone? My unease deepens year by year 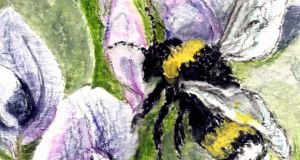 Stripped of its old cover, stressed by winter storms and clouded with algae, the polytunnel wears its new and shiny bodice like a dragonfly just glossily emerged. And before you ask, the shreds of the old plastic were hauled away for recycling, to be bundled in with the hillside’s black silage wrappings that might, on past occasion, have flown the odd Isis flag from the wire.

The new cover is French and trés transparent, so that the tall trellis of flowering nasturtiums glows gaudily at its heart. They have done a good job of bringing in bumblebees to nuzzle at the flowers of broad beans and peas and, soon I hope, the tomatoes.

The bees’ spring reappearance has been a relief, but they seem rather fewer than usual, even on a sunny day. Indeed, the spring air of the acre has again been disturbingly free of flying insects.

Two or three speckled woods and a scatter of whites are all the butterflies; midges hover in small and avoidable aerial mobs. In the international Year of the Fly, a few miniature bluebottles bask brightly on the leaves, but I still watch for the shimmer of a beneficent hoverfly.

On a hillside with ample rough patches and leafy waysides and where no one for miles is spraying anything but slurry, this unease has been deepening year by year. Reluctant to dramatise, I have quietly blamed it on the changes in the acre’s habitat – an open, thistly field now largely canopied in trees, the hedges grown tall, a flower garden now much overgrown.

Trees and hedges are good for aphids, leaf bugs and caterpillars, so the songbirds seem happy enough. Their star performer, the mistle thrush, keeps up his morning aria from the gable’s broadband array.

So much for our little patch of the planet. Meanwhile, the new and formidably sourced UN report on the destruction of nature seems to have left the human world largely dumbstruck or indifferent. After so many years of chronicling the trends in this column, species by species and habitat by habitat, I find the new figures properly appalling but their message no surprise.

Allowed, in old age, to entertain grand if gloomy explanations, I find what is happening entirely consistent with the basic history of our species. This has been set out quite brilliantly by an Israeli academic, Dr Yuval Noah Harari, in his recent and best-selling book, Sapiens: A Brief History of Humankind. Bill Gates recommends it, if that counts.

For more than two million years, as Harari reminds us, various breeds of humans fed themselves by gathering plants and hunting animals, their numbers generally in balance with the rest of the natural world. About 10,000 years ago, Homo sapiens in many separate parts of the planet began to spend their time manipulating the lives of a few edible plants and biddable animals and finding the need to settle down.

“Scholars once proclaimed,” writes Harari, “that the agricultural revolution was a great leap forward for humanity [in which] evolution gradually produced ever more intelligent people.” He finds no evidence for this. And the extra food “did not translate into a better diet or more leisure. Rather it translated into population explosions and pampered elites.” It had “the cumulative effect of forcing ancient foragers to spend their days carrying water buckets under a scorching sun”.

One chapter, History’s Biggest Fraud, chronicles the traps set by the long-term pursuit of an easier life. When luxuries become necessities, they spawn new and never-ending obligations. “Humanity’s search for an easier life,” he concludes, “released immense forces of change that transformed the world in ways nobody envisioned or wanted.”

Among them, as I see it, is a mindset of expectation, entitlement and addiction to unremitting novelty, matched to the siren imperative of “growth”. With the world population nudging 10 billion by 2050, human usage spread across three-quarters of the planet’s land, and a million plants and animals at risk of extinction, the collapse of global ecosystems seems inevitable.

Who has to care? The formidably sourced and scary UN report calls for “transformative change” across all areas of government, revised trade rules, massive investments in forests and other green infrastructure and changes in individual behaviour such as lower consumption of meat and material goods.

What we know of the administrative ecosystems of nations does not encourage much hope of swift and committed action. And what we know of most people’s lives scarcely improves the promise of any “transformative” change. Like the global pledges on climate. “It’s not going to happen,” we tell the telly. No one under 30 should accept that – I marched with CND to ban the bomb.

I hope this column, should it be archived long enough, will be mocked as the work of a miserably sceptical old fart. And I’m sorry to whoever has to dig up the polytunnel to make room for a few more trees.