Finally: Summer on the cards as temperatures set to soar next week

Chilly conditions to continue this week, but forecasters see change 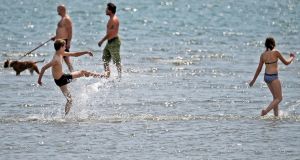 Temperatures are set to soar next week, according to Met Éireann.

Ireland has been in the grip of chilly and damp conditions in the last weeks of spring, but summer is well and truly on the horizon, forecasters say.

John Eagleton of Met Éireann said temperatures would rise steadily from the weekend onwards and would reach the low 20s by the middle of next week.

Thursday will continue showery with widespread rain this afternoon with the chance of an isolated hail shower. Temperatures will be between 9 and 14 degrees .

Tonight will be cold with lows of 0 degrees and temperatures could even dip just below freezing in a few areas. A few mist and fog patches possible in calm conditions.

Friday will be showery and bright with highest temperatures of 14 degrees.

Met Éireann says the weekend will be dry “with good sunshine on both of the days.

“Temperatures on Saturday will range from 11 to 14 degrees in almost calm conditions. During Sunday temperatures will increase to between 13 and 17 degrees”.