Delegation tells the committee that damage to the weir has severely limited ability of anglers, rowers and other groups to use the amenity 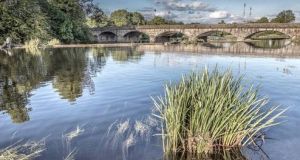 A delegation from Fermoy, Co Cork, has called on the Oireachtas Public Petitions Committee to demand that repairs be carried out on the town’s historic weir on the river Blackwater.

The committee was told on Wednesday that the weir was badly damaged recently when flooding repairs were carried out nearby. This had severely limited the ability of anglers, rowing clubs and other groups to use the amenity.

Paul Kavanagh said the major obstacles to getting the work done was the failure of Cork County Council to commit to funding repairs, and a view of Inland Fisheries Ireland that “all weirs are a hindrance” to fish moving up river.

He said fish stocks, notably wild salmon, had been depleted by overfishing at sea against scientific advice. “The claim that the weir should be removed because it has prevented salmon from migrating upriver can be totally discredited by the fact that the official surplus for the Blackwater in 2018/19 is in excess of 7,200 fish, which is back up at 2008 levels.”

He said they understood a proposal to build a new fish bypass channel was being discussed and planned by the Inland Fisheries Ireland and Cork County Council.

“We have yet to see the plans of this channel despite several requests, and as a result have no idea of what is planned or what its effects will be on future water levels upriver. We feel this new channel is unnecessary, and a waste of taxpayers’ money.”

Mr Kavanagh said they understood the cost of the works was up to €4.5 million due to repeated delays over many years in repairing the protected structure. This would involve building a new fish pass at a different location.

“So, after all of the above evidence, why is a weir, that has functioned efficiently for over 200 years, all of a sudden causing concern – just repair it, “ Mr Kavanagh said.

The delegation believed this could be done for €1 million, and its existing fish pass would be restored to working order.

He said a temporary a water-filled boom should be installed at a cost of less than €50,000 upriver from the bridge “to restrict water flow and will allow our clubs operate some bit of normality for the coming summer”.

Angler Tommy Lawton said the Central Fisheries Board and Inland Fisheries Ireland had failed to come up with a viable repair plan for the weir over the past 20 years “because the only real plan they had was to put in a rock ramp pass”.

“This would have necessitated the removal of a protected structure, which the people of Fermoy oppose outright.”

He said the current impasse meant Fermoy regatta was likely to be cancelled for the first time in 80 years, while thousands of river-users would not have access to it.

The Public Petitions Committee, which has statutory powers, agreed to request all relevant State agencies and Cork Co Council to

provide their observations on the issue and appear before the committee. It will announce its verdict in coming months.