Weekend weather to cool with overnight temperatures below zero 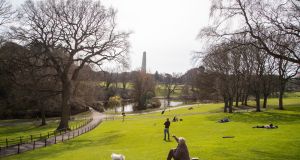 The recent mild, springtime temperatures are set to drop over the weekend with overnight frost expected across most of the country, Met Éireann has said.

However, people will be able to take advantage of the bright and clear daytime skies, which are due to last over the coming days, by getting out for a breather as coronavirus restrictions remain in place.

Conditions on Friday will remain dry with temperatures reaching 14 degrees and a mix of cloud and sunshine through the afternoon. However, Met Éireann is forecasting “fresher” temperatures for the weekend and cold overnight lows.

Saturday will see a mix of cloud and sunny spells with temperatures ranging from 7-10 degrees. The coolest weather will be on northern and eastern coasts with some passing rain showers in the east. Temperatures will drop after dark with widespread frost and lows of -2 to +1 degrees.

Sunday will start frosty but lead to bright spring sunshine throughout the day. Temperatures will be cooler than this week, ranging between 7 and 9 degrees with the odd wintry shower in the north of the country.

These cooler temperatures are forecast to continue next week along with some dark frost in places.

People are advised to remember that “summer time” begins at 1am this Sunday with the clocks going forward one hour.

However, increased restrictions around socialising, and advice to maintain “social distance” at all times, means opportunities to take advantage of the longer evenings will be limited.

The Government advice remains that people should “stay home if at all possible” and that any social gatherings must be limited to a maximum of four people unless they are from the same household.

An increased presence of park rangers and gardaí in parks and public places has also been introduced to ensure physical distancing is being observed.

Last year, the Government opposed the European Union’s proposal to end seasonal clock changes as it could result in different time zones in Ireland after Brexit.

The Government’s decision followed a public consultation in which 66 per cent of respondents voted in favour of abolishing the biannual clock change.

But four out of every five of the 1,000 people who took part in the survey said they would oppose the change if it were to result in a different time zones north and south of the Border.

The standard winter time in Ireland, which lasts from October 31st to March 31st, was first introduced in May 1916. The UK and the Republic abolished their previous summer time arrangements in 1968 to harmonise with the rest of Europe and switched back again in 1972.