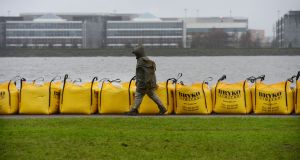 The construction of new flood defences in Clontarf, Dublin, is to go ahead almost a decade after controversial coastal barriers were rejected by local residents.

Dublin City Council has selected a “dual wall” solution, with the main barrier at the sea and a secondary defence wall located along the footpath at Clontarf Road. Parts of the secondary wall will be demountable.

The demountable sections will be used in areas where higher defences, above 1.2m, are needed and will be erected at times when the area is at risk of flooding. An estimated 400 homes and businesses are at “significant risk of flooding” the council said.

The council secured planning permission from An Bord Pleanála in 2008 to build flood defences up to 2.75m (9ft) involving earthen embankments and walls at a cost of €4 million.

Following objections from local residents, the council offered to reduce the height of the protective embankment to 2.17m (7ft), the lowest height permitted by An Bord Pleanála.

However, despite having been hit by an “extreme tidal event” in February 2002 and a less severe one in October 2004, both of which caused damage to homes and businesses, residents opposed this reduced barrier.

The council said it received more than 2,000 submissions which had been “virtually wholly opposed” to the project going ahead even in its modified form. Locals had described the defences as a “cheap and nasty solution” and an “eyesore”. Safety concerns of walkers using the promenade were also raised. Large yellow sandbags have been left in place along the Clontarf Road since.

In late 2018 the council proposed new €10 million defence barriers up to 1.6m tall (5ft 3), also involving a dual wall solution, which it intended to submit to An Bord Pleanála. However, concerns remained in relation to the heights, with residents worried in particular that women walking along the sea promenade would not be visible from the road due to the secondary wall.

The council now says that, “after much discussion and consultation” with a joint working group of local elected representatives, council officials and community representatives, it had decided on a solution that would see demountable barriers used where the height would exceed 1.2m.

The revised cost of the project is not yet known. The council said “additional work exploring possible procurement options is currently ongoing”.

However, Green Party councillor Donna Cooney said she remained unhappy with the plans, which would involve using the cycleway and promenade as a flood plain, with the waters blocked from reaching the road by the secondary wall.

“I honestly don’t see why you would protect the road but not the cycleway. The wall should be on the sea side of the cycleway. Also demountables rely on manpower which requires time and money and enough warning for the perfect storm.”

Ms Cooney said she would favour a “well-designed multifunctional flood defence” which could involve a raised cycleway on top of the barrier to create passive viewing.

“I see big flaws in these plans and they don’t seem to have taken into account the concerns raised, particularly in relation to passive surveillance of the promenade. They haven’t even costed the alternatives before deciding to dismiss them.”