Drought helpline set up for farmers struggling to feed stock 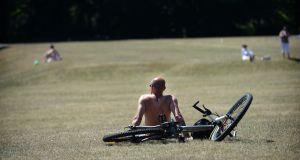 The exceptional spell of hot, dry weather is set to continue into the end of next week, with no rain forecast for the next ten days, Met Éireann has said.

This weekend is set to see the hottest temperatures of the week, potentially hitting 30 degrees in one of two parts of the country, according to senior meteorologist John Eagleton.

In terms of rainfall there will be practically “nothing in the next ten days” Mr Eagleton said. Another factor behind the hot weather is the humidity levels are very low, which means it is not clammy or sticky, he said.

“The skies are dead blue. It’s the best period of weather I’ve ever seen, it’s fabulous” he said.

Top temperatures on Wednesday will be upwards of 23 degrees, Met Éireann forecast, with the Midlands to be the warmest part of the country.

Similar to much of the last week and a half, it will be dry with light breezes, the national forecaster anticipates.

Irish Water said a hosepipe ban introduced across the Greater Dublin area on Monday, has helped reduce demand on the stretched water utility. Irish Water can produce 610 million litres of treated water for the Dublin region and parts of surrounding counties per day. Last Wednesday some 615m litres of water was drawn down in Dublin, but this dropped to 578m litres on Monday, following a ban on people using garden hoses. Due to the high temperatures and near drought conditions the utility’s reservoirs have been drained.

The month-long ban means people cannot use their garden hose to water their plants, cars, gardens, or fill up a paddling pool.

A spokeswoman for Irish Water said a decision on extending the hosepipe ban to other parts of the country would be made by the end of the week. Water schemes in parts of Kilkenny, Laois and Limerick are under major pressure, and may see the water conservation order extended to those areas.

Irish Water said since the ban was introduced it has received less than ten reports of people breaking it and excessively using water. Households ignoring the ban can be fined €125, and prosecuted if they fail to pay the fine.

Dublin Fire Brigade have been dealing with several gorse fires in recent days. On Tuesday the fire service were tackling two gorse fire blazes, in Coolock, north Dublin and in the Dublin mountains.

The fire service advised any households down wind of large gorse fires to close their windows, to avoid inhaling the thick smoke, and for motorists to drive cautiously due to reduced visibility on roads.

Last week fire services in the eastern region of the country logged 608 incidents, 171 of which were gorse fires. A further 109 were grass fires, mainly in green areas of housing estates or fields, and 21 were forest fires. Wicklow saw the most gorse fires, with 56 logged incidents.

Teagasc, the State’s farming advice service, has set up a drought helpline for farmers offering advice on feeding stock and other issues. Farmers can contact this helpline at 087- 7971377 from 9am to 9pm each day. There are also a series of clinics and events taking place around the country where advice will be available for farmers.