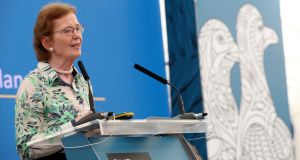 Former president Mary Robinson has said she was “saddened” to hear Taoiseach Leo Varadkar refer to Ireland as being a “laggard” in tackling climate change.

Mrs Robinson recalled that when she served as president, from 1990 to 1997, she had “many challenges”, but “I never had to consider evacuation of a country” like certain developing countries threatened by rising sea levels.

A report published this month by Climate Action Network (CAN) Europe, a non-governmental coalition supported by the European Commission, has identified Ireland as the second worst performing EU member state in tackling climate change.

The former UN high commissioner for human rights who was appointed UN special envoy on climate change and established the Mary Robinson Foundation, said that migration should be seen as an “acceptable part of adaptation” by countries which have no other choice.

She recalled a discussion with Anote Tong, president of the Pacific island of Kiribati, who explained how he had adopted a policy of “migration by dignity” by buying land in Fiji, due to the threat rising sea levels posed to the islands.

Mrs Robinson said that the current migration crisis should be seen as a “forewarning” of movements of people due to the impact on land and resource.

She urged a “long term view” towards the current situation, noting that an estimated 150 million to 250 million people may be migrating by 2050.

She welcomed the fact that Ireland had recently agreed to accept more refugees, but expressed concern about the situation on European borders and with ships rescuing migrants at sea being “turned away”, as occurred in Italy this month.

Human rights, procedural rights as in access to information, and substantive rights, as in access to food and shelter, have to be seen as “essential “ and “fundamental tools” for those who must “move voluntarily or as a last resort”, she said.

Adaptation to climate change has been estimated at costing up to $300 million a year by 2050, and so forced migration must be seen as part of a “loss and damage” strategy, she noted.

The very countries at the “frontline” of human-induced climate change were the ones least responsible, she noted, and many of these are coastal states.

“Increased acidification will make oceans much less hospitable”, and will exacerbate the hardship experienced by some some 540 million people depending on fisheries and aquaculture, she said.

She welcomed the UN general assembly hosting of its first oceans conference last year, where almost 200 states made “voluntary commitments”.

When the late Eleanor Roosevelt was drafting the first Universal Declaration of Human Rights, it would have been “unthinkable” that whole populations would have to move due to climate change, Mrs Robinson said.

Mrs Robinson, who was part of a panel of speakers chaired by broadcaster Olivia O’Leary, said she welcome the focus on reducing single-use plastics. She confirmed that she has participated in a podcast series with comedian Maeve Higgins, due to be released later this summer, which approached climate change as a “man-made problem” requiring a female solution.

Responding to her criticisms of the Government’s approach to climate change, Minister for Agriculture Michael Creed said that it was “important to compare like with like” in criticisms of the contribution that Irish agriculture is making to emissions.

“We are the only EU member state that does not have a history of heavy industry,”he noted, outlining a number of initiatives in the dairy and beef sector to reduce impact.

The ocean wealth conference is part of the national Seafest, which is expected to attract up to 100,000 people to Galway over the next three days.