Water shortage fears as temperatures to hit 22 degrees this week 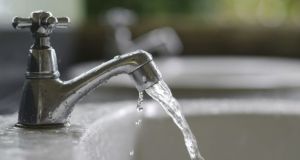 Irish Water has warned that the demand for water in the greater Dublin region and East Midlands is at risk of exceeding current supplies.

The Dublin region is currently using around 600 million litres of water a day, with a usage of 567 million litres recorded on Sunday, June 17th. However, the utility has warned that Dublin, Athlone and Mullingar could face water shortages if people overuse supplies.

General manager at Irish Water Eamon Gallen said there needed to be a “sustained period of dry weather” in order to lead to drought problems but added that people’s water usage in the Dublin area was being closely monitored. He warned that if usage increased by just 1-2 per cent parts of Dublin and east midlands could suffer shortages.

Some island communities off the west coast are also at risk of water shortages, he added.

Mr Gallen said that while longer days and higher temperatures were welcomed by most, they were a cause for concern for Irish Water which is trying to maintain a balance between water supply and demand.

A spokeswoman for Irish Water said a specially appointed Drought Management Group was monitoring the dry weather conditions on a daily basis to ensure water supplies remain available to all communities across Ireland. She said extra storage supplies were being kept in reservoirs in case of extended dry periods.

Last year the State utility had to source extra supplies on the network for Mullingar, while bottled water had to be shipped out to the Aran Islands.

Monday evening will remain mild with lowest temperatures dropping to between 9 and 12 degrees Celsius. There will be some patchy drizzle and light rain later in the night.

Tuesday will also be warm and sunny with highs of between 18 to 22 degrees. However, Tuesday night will bring continuous rain which will be heavy in the north and west of the country. This rain will not only help fill reservoirs but also should reduce the demand for water.

Wednesday will be dry with sunny spells and some isolated showers in the north. Fresher temperatures will bring moderate westerly breezes.

Thursday June 21st, the longest day of the year, is set to be cloudy but dry with light winds and warm temperatures in the mid to high teens. Friday is also expected to be dry with some cloud and warm sunny spells.

The dry, fine weather is forecast to continue into the weekend with inland temperatures reaching well into the twenties by Sunday.

1 Coronavirus: 396 more cases as public is urged to help protect ‘older and vulnerable’
2 The FinCEN files: The billion dollar a month money trail
3 The Sack of Balbriggan: The burning of a town that shocked the world 100 years ago
4 Gardaí break up rave attended by 60 people at Dublin flat complex
5 Founder member of the Alliance Party dies from Covid-19
Real news has value SUBSCRIBE