Volunteers in kayaks to clean up Liffey 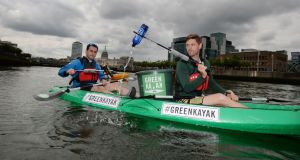 A new clean-up initiative which involves volunteers kayaking down the river Liffey to pick up rubbish has been launched.

GreenKayak, a Danish non-governmental organisation founded in 2017 by Tobias Weber-Andersen, operates a free service where volunteers sign up to kayak along the river in exchange for picking up litter.

The initiative launched its first Irish venture, in partnership with Dublin’s City Kayaking, on Tuesday. It aims to collect plastic from the river Liffey before it reaches the Irish Sea.

Each kayak is fitted with a bin and tools for grabbing plastic bobbing on the water’s surface. Each bin is weighed after docking, and the waste is recycled.

Volunteers must then share their experience on social media to promote the initiative.

Mr Weber-Andersen was operating his own kayak rental business in Copenhagen harbour when he decided to do something about the volume of rubbish in the canal. He said he is delighted to bring the operation to Ireland, and increase the amount of environmental awareness in the city.

“It means that we will have trash lifted from the water in Dublin, and that’s really important as the canals are connected to the sea and we need to get the rubbish before it reaches the ocean,” he said.

“Here in Dublin, the water looks clean, but when you look in the dead ends and the corners there’s a lot of trash. I don’t think it is more trash than Copenhagen but it’s about the same.”

“We’re working on expanding globally because this initiative is for everybody that wants to win the fight against ocean pollution. We have a lot of people using the kayaks, and people who want to volunteer.”

GreenKayak has launched similar initiatives in seven other cities across Denmark, Norway and Germany.

City Kayaking, a Dublin-based kayak tour company, has already been running a weekly plastic collection on the Liffey in partnership with Microsoft since 2018, bringing volunteers to kayak the Liffey and collect floating plastic.

Michael Byrne, from City Kayaking, said: “We’re very passionate about the river Liffey in Dublin and breathing new life into it.

“A large proportion of sea plastic originates in city rivers and we’re thrilled to be part of a global network under GreenKayak that are taking action to tackle this.

“We are aiming to involve youth and community groups from the inner city as well as some of the companies in the vicinity of the river.

“We hope that this will result in the local community having an increased awareness of the marine environmental issues that impact on the river, our waterways and oceans in general, and who are motivated to tackle these.”