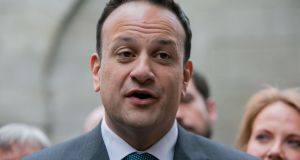 Leo Varadkar: if ‘we may need to make an exception’ and reinstate a guillotine to time-limit debate of a new road safety Bill. Photograph: Collins

The Taoiseach has threatened to reinstate the Dáil guillotine to pass a controversial Bill that changes some drink drive penalties due to growing frustration at filibustering by a group of rural deputies opposed to it.

In response to an open letter from road safety group Parc complaining about parliamentary tactics being used to slow the passage of the Bill, Leo Varadkar said although the guillotine to time-limit a debate was no longer used under “new politics”, an exception may be needed to be made as the “endless debate is holding up this and other important legislation”.

He told Parc member Susan Gray that use of the guillotine would have to agreed by the Dáil business committee because “the Government no longer has the power to impose a guillotine as we are in a minority in the Dail.”

A guillotine is where the Dáil votes to stop debating a Bill and instead to vote to pass or reject it. Where a Government has a majority in the Dáil it can use it to pass its legislation.

However, the Opposition usually objects, and the present Government agreed to stop use of the device

“Under new politics, we no longer use the guillotine to time-limit debate but if the current tactics persist, we may need to make an exception, though that would require broad cross-party support,” Mr Varadkar.

The Taoiseach said he was fully supportive of the Bill and said all Fine Gael TDs will vote for it.

The Bill also strengthens penalties for car owners who allow unaccompanied learner drivers on the road in their vehicles and provides for the seizure of cars used by lone learner permit holders.

“It is galling to see these TDs, who have been elected to act for the greater good, abusing their Dáil ‘privilege’ position as TDs in delaying lifesaving amendments to the Road Traffic (Amendment) Bill, be it regarding drink impaired drivers or unaccompanied learner drivers,” Mrs Gray wrote, in the letter on behalf of Parc.

She called on the Taoiseach to ensure the Bill can pass through the Oireachtas without further delay.

The slow passage of this Bill has also caused intense frustration for Mr Ross who last week apparently tackled Mr McGrath on his delaying tactics and accused his former ally of being “a bollocks” and an “out and out bollocks”.

An example of the filibustering was seen during a debate earlier this month on the Bill when Mr McGrath was interrupted in full Dáil flow after being on his feet for more than two hours.

As this debate related to the “recommittal” of an amendment or section of a Bill there were no speaking time limits, unless the deputy was interrupted, as Mr McGrath was .

The Road Traffic (Amendment) Bill is at report stage and is due to return to the Dail next week. Not all amendents to the Bill have been dealt with.

The Independent TDs have fiercely defended their stance, even though Sinn Féin, most parties and Independents have accepted the Bill. Fianna Fáil has acknowledged its passage is inevitable.