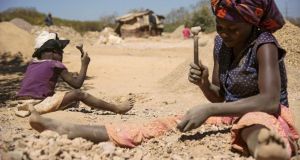 A child and a woman break rocks at a cobalt pit in Lubumbashi in the DRC. Photograph: Junior Kannah/AFP/Getty Images

As the global transition to clean energy has progressed, demand for cobalt has rocketed. A natural metallic element, cobalt has unique properties that make it a key component in the production of batteries. Until recently, smartphones and laptops drove demand for batteries; however, the growing market for electric vehicles and renewable-energy power storage has resulted in a surge in the demand for cobalt.

The Democratic Republic of Congo (DRC) is one of the world’s wealthiest countries when it comes to natural resources and contains half of the world’s cobalt reserves. Despite the country’s natural mineral wealth, however, many challenges persist there. To facilitate the emerging clean and sustainable economy the world is highly dependent on a mineral produced via some of the most criticised practices, with no one being held accountable for the human-rights abuses taking place.

As governments of major world economies including China, the UK, Germany and France have announced restrictions or bans on vehicles using internal-combustion engines, the market has responded, with a a rapid expansion of the production of electric vehicles. Whatever the benefits of the move away from fossil fuels, it has other implications too.

Reports on cobalt mining in the DRC illustrate unethical practices taking place. A growing number of unmonitored “artisanal” mines crawl with barefoot children filtering the cobalt with their hands, in harsh and dangerous conditions.

A report published by Amnesty International in 2016, This is What We Die For, highlighted the number of major corporations – including Apple, Tesla, Samsung and other tech and automotive companies – that have failed to ensure that their cobalt supply chain does not involve child labour. It said about 20 per cent of the DRC’s cobalt production is mined by hand in unregulated mines, often with child labour and in dangerous conditions.

Who do we hold accountable for these problems? The DRC’s government should not, of course, allow these artisanal mines to operate, but due to persistent corruption and conflict the regime is unable to regulate these practices. It is not the only human rights concern in the DRC, but it is one over which the international community has a certain degree of control.

Pretty much the only proposed solution so far has been to replace cobalt or stop the purchase of cobalt from the Congo. Companies such as Tesla and Apple, in particular, have expressed concern at the ongoing trade. A start-up called Ionic Materials is among the companies aiming to create a new generation of batteries that will not require cobalt.

Without such a shift, cobalt demand is set to more than double within the next decade. Sixty per cent of last year’s production came from DRC.

Even if companies no longer used a supply chain tainted by child labour or other unethical practices, other problems remain. Indeed, the passing in the United States, in 2010, of legislation aimed at reducing trade in “conflict minerals” served only to exacerbate the problem. As multinationals stopped buying minerals from the DRC, unemployed miners were driven to join armed rebel groups to make a living.

Consumers also play a role in relation to this issue, given the reluctance of corporations to act in relation to controversial issues unless they fear damage to their brands. When consumers engage with issues, media coverage follows and the momentum for change increases. However, for many consumers ignorance is bliss. Whereas consumers may be curious about, for example, antibiotics in meat, batteries for iPhones or electric vehicles are less of a hot-button issue. Despite this, we need a shift towards demanding transparency in relation to all manufactured goods.

Continuing the use of cobalt from the DRC means child labour and other human-rights issues will persist. While finding a replacement to cobalt or even regulating trade in the element to the point that corporations will look for alternatives just allows the international community to turn its back on what is going on in the DRC. In reality, intervention from the United States, the European Union or others would be driven partly by self-interest: they need cobalt so they are willing to try to help. This is a pattern frequently seen in African, a reminder that the commercialisation of natural resources comes at a price.