Three Dublin districts among four dirtiest places in the State 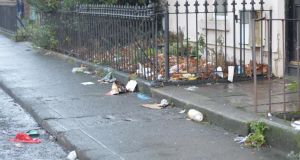 Dublin’s north inner city remains a litter “black spot” according to Irish Business Against Litter (Ibal), despite a crackdown on illegal dumping in the area announced by Dublin City Council last year.

Three Dublin districts are among the four dirtiest places in the State, according to Ibal, with Dublin’s north inner city pipped only by Farranree in Cork for the title of Ireland’s worst litter black spot.

The anti-litter league assessment of 40 urban areas carried out by An Taisce for Ibal found that while Ireland’s towns are getting cleaner, the main cities had deteriorated.

Areas of Dublin, Cork and Limerick occupy the six lowest positions in the table. Farranree and north inner-city Dublin were black spots, Tallaght was classed as “littered”, while Dublin city in general, Limerick city and Cork city were “moderately littered”.

At the other end of the table, Kilkenny and Cavan were Ireland’s cleanest towns, followed by Killarney, Tramore and Longford. These were among 18 towns deemed cleaner than the European average.

An Taisce said it was “disappointing” the north inner city had failed to improve on its black spot ranking of last year.

“Since monitoring began little has progressed here, despite the negative publicity. There was a marked absence of litter-free sites generally.”

The council late last year said it intended to call to houses in the area where it believes residents leave their rubbish in the streets instead of paying for waste collection.

Also disappointing, An Taisce said, was the slip in performance by Dublin city in general. “It is a pity that the tourists visiting the Guinness Storehouse . . . are presented with such a littered environment.”

However it noted O’Connell Street was in “very good order” as was Smithfield and Glasnevin Cemetery. The approach roads to Dublin Airport, previously singled out for their high levels of litter, showed a significant improvement “one which will make a real difference for tourists entering the country”.