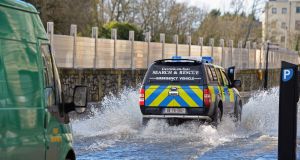 Insurers say they still cannot offer insurance to certain homes where temporary flood barriers have proven to be effective because of the risk of “human error”.

The new position represents a marked change from insurers’ previous assertions that demountables are not as effective as permanent solutions such as levees and attenuation measures.

However, properties covered by temporary flood relief schemes cannot be treated the same as those protected by permanent defences due to continued uncertainty over the prospect of human or mechanical failures, Mr Thompson told the committee.

He listed a number of examples from the Republic and the UK where faults with sensors and pumps allowed flood waters to breach defences, as well as occasions on which flood relief workers were not able to mobilise demountable barriers on time.

Mr Thompson said 98 per cent of insured homes in Ireland had flood cover, falling to 89 per cent in areas with fixed defences and 78 per cent for demountable defences.

Quoting figures from the Office of Public Works (OPW), he indicated about 30,000 households nationwide were not insured against flooding.

In contrast to assertions from underwriters that levels of flood coverage are improving in protected areas, National Forum of Community Flood Committees representative Jer Buckley said there were instances in which households lost coverage even after temporary defences had been erected.

Mr Buckley told committee members that despite State investment of more than €100 million in flood relief schemes for the towns of Fermoy, Mallow and Clonmel, businesses and householders continued to face difficulties in securing insurance.

This meant houses could not be bought and sold due to incomplete insurance arrangements, and that local businesses in such areas are struggling to secure finance from lending institutions because of the potential risk to their properties.

Commenting on a proposed Government spend of €430 million on similar defences across Cork city, Skibbereen, Bantry and other towns, Fermoy-based businessman Paul Kavanagh said people in those areas are under the misapprehension that they will be eligible for insurance against flooding afterwards.

Mr Buckley said whole streets in the town of Fermoy remained “blacklisted” despite no breaches of new flood defences costing €35 million having occurred since they were installed in 2014.

Mr Buckley said the memorandum of understanding reached between the OPW and Insurance Ireland in 2014 which aimed to potentially extend flood insurance to newly-protected areas “is not working” as there has been “no buy-in” from Insurance Ireland, and that legislation is the only solution.

TDs and Senators present heard from Cork Business Association president Pat O’Connell that the city was being passed over for international investment because of difficulties in procuring flood insurance.

“There are businesses in Cork city on their knees because they borrowed heavily with personal guarantees following the last flood,” he said, adding that many now found themselves with “substantial” debt as a result.

Mr Buckley recalled encounters with elderly pensioners living in the city for more than half a century who had “come into us with bills of up to €1,500 for insurance they should be getting for €300”.

Members of the committee will discuss a proposal to bring in representatives from individual home insurance companies to explain their refusal to provide flood coverage for defended areas when it reconvenes on Tuesday.