Electric cars about to become ‘the new normal’ in Ireland 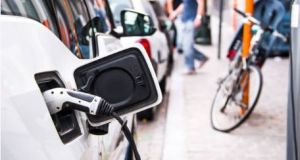 There were 3,800 electric vehicles (EVs) on Irish roads by the end of 2017 but registrations of new and imported EVs are currently up by 40 per cent compared to same period last year. File photograph: Getty Images

The use of the electric vehicle (EV) on Irish roads is about to become “the new normal for people in their everyday lives” and “no longer just a progressive, environmental fad”.

That was the prediction of Jim Gannon, chief executive of the Sustainable Energy Authority of Ireland (SEAI), following the announcement of a public engagement campaign on EVs funded by the Government.

There were 3,800 electric vehicles (EVs) on Irish roads by the end of 2017 but registrations of new and imported EVs are currently up by 40 per cent compared to same period last year.

He was speaking in Dublin’s RDS on Wednesday when the first phase of the SEAI campaign was unveiled – a single website allowing drivers to compare almost 40 different EV models now available in Ireland.

It also outlines how to access grants available to motorists and businesses – and helps motorists arrange for a test drive at their local dealer. It can be accessed at www.DrivingElectric.ie.

SEAI chair Julie O’Neill said: “At present, electric vehicles make up less than 1 per cent of the vehicle fleet in Ireland. We understand people’s concerns about driving electric, so the aim of this campaign is to dispel any of the myths around EVs, such as range, cost and charging, and to demonstrate that electric vehicles are for everyone.”

She added: “In 15 to 20 years’ time, the face of driving electric in Ireland will have changed completely from what we know now and the new website was a critical building block in that transition.”

Society of the Irish Motor Industry director-general Alan Nolan said the future of motoring had to be one of zero emissions. The campaign was another important step in increasing the profile of EVs with consumers, providing them with key information not previously available from a central source “but which is crucial in shaping their buying decisions”.

The infamous “range anxiety” associated with EVs would soon be over, Mr Gannon said, as the average range was now about 200km. While the “all-Ireland car” was not quite there yet, new models were about to increase their ranges further, which in time would reduce issues around the availability of recharging points.

In a statement, Minister for Communications, Climate Action and Environment Denis Naughten said he had secured a record level of funding this year with a view to boosting EV ownership, including purchase grants, 0 per cent benefit-in-kind and home charger installation grants.

He said he would like to see greater uptake not just by private car owners but also the public sector. “I am encouraging the Office of Government Procurement to actively engage and advise the public sector on use of electric vehicles across all areas, including the Defence Forces, An Garda Síochána, An Post, educational institutions and the HSE.”

Mr Naughten added: “Reducing the carbon footprint of transport is one of Ireland’s most pressing challenges. We need to move to a low-carbon electric vehicle future. SEAI’s campaign will help demystify electric vehicles for everyone and, in turn, increase their uptake.”

Later this year, a series of EV roadshows will be staged by the SEAI throughout the country, encouraging people to test-drive an electric car.

The website featured on the opening day of the SEAI’s annual energy show, where EVs with a price range from €20,000 up to €140,000 were on display – €90 million in business activity was secured at the event last year.

The show confirmed that using sustainable energy was now a normal part of life, Mr Gannon said. A number of SEAI reports had, however, shown Ireland was behind on national targets to reduce emissions.

“To my mind that represents a burning platform for policy-makers and for industry. Aligned with that, we have seen a Eurobarometer poll that says nearly 90 per cent of Irish people – the public – believe that addressing climate change can be a boost for the economy. This energy show evidences this.”