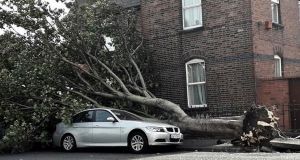 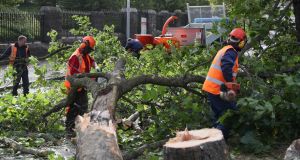 Workmen deal with a fallen tree on Finglass Road by Glasnevin Cemetary in Dublin. Photograph: PA 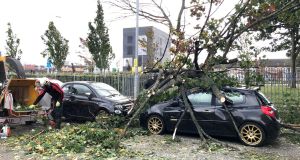 A tree which fell onto a car in Belfast during Storm Ali. Photograph: PA

Fears of a third storm in nearly as many days look unlikely to materialise over the weekend, Met Éireann forecasters have said.

A weather system that threatened to develop into a storm, which would be named Storm Callum, may not be as strong as initially feared.

The system will bring heavy rain to many parts of the country, with “blustery winds”, but at the moment is not on track to be classified as a storm, according to Met Éireann meteorologist Liz Gavin.

“We’re still monitoring it, and keeping track of the weather system. At the moment it doesn’t look like developing into a storm ... There will be heavy rains in parts of Leinster and Munster on Saturday, and overnight rains,” she said.

Earlier in the week meteorologist Joan Blackburn said there was potential for the system to develop into what could be a “nasty” storm.

The start of Saturday will be dry and cold in most parts of the country. Top temperatures will range from 10 to 13 degrees, according to the national forecaster.

Rainfall is set to move in across the southwest of the country over the day, and is expected to be heaviest in parts of Munster and south Leinster. Northern counties will remain mostly dry with only scattered showers predicted.

On Sunday the strong rain and winds will begin to clear through the morning. Met Éireann forecast it will still be very windy along the coasts for much of the day. The bad weather will clear from the west of the country first, but temperatures will remain cold.

The outlook for next week is for dry weather, with a mix of sunny spells and clouds. Winds will be much more moderate compared to recent days, with temperatures slightly warmer as well.

Repair crews continue to work to restore power to the remaining 3,900 homes and businesses still without electricity on Friday morning.

ESB Networks said the majority of remaining customers without power since Storm Ali hit Ireland on Wednesday were located in Cavan, Longford, Tuam and Mullingar.

Repair crews from elsewhere in the country have been redirected to these areas, to speed up efforts to restore power. In most cases those without power were served by single customer lines. The storm brought high winds which felled trees and caused chaos across the transport network.

A spokeswoman for the utility said “we hope to restore power to a majority of impacted customers tonight.”

Two people died during the storm.

A full service on the Luas Green line resumed this morning.

Up to 180,000 homes were without power at one stage on Wednesday. Repair efforts were hampered by Storm Bronagh, which followed Storm Ali on Thursday, and brought heavy rain across Ireland yesterday evening and overnight.

It is expected to be at its peak in the early hours of the morning as it moves across the English midlands and southeast coast.

Homes and businesses still without power are mainly in the south-east and mid-Ulster region, the utility said. Additional teams have been redeployed to these areas, with 500 employees working on repair efforts.

Repair crews began work again at first light on Friday morning to fix the remaining 600 faults in the network. The company said the majority of faults were in isolated areas serving small numbers of customers.