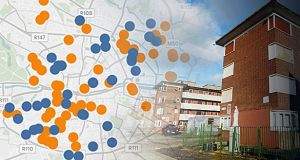 The most expensive site on the Vacant Sites Register in the city is the former Player Wills cigarette factory, valued at €23.8 million

Almost 200 sites and properties worth millions of euros are lying empty in Dublin city and county amid a housing and homeless crisis, data compiled by authorities show.

Vacant sites worth more than €400 million have been identified at 114 locations across Dublin city and county, the vast majority of which - almost 90 - are in the Dublin city area. This list is known as the Vacant Sites Register and is shown with orange dots on the map below.

Separately, there are 87 sites on Dublin City Council’s Derelict Sites Register - shown in blue on the map. This register has been in place for almost 30 years, having been set up under legislation in 1990 to stop property owners from neglecting their buildings and sites.

While the term “derelict site” is used, the register is generally used for houses and other buildings that are in a poor condition, while the vacant sites register is more likely to be used for plots of land that could be used to build homes.

As with the Vacant Sites Register, owners of properties on the Derelict Sites Register face annual fines of 3 per cent, which will increase to 7 per cent in 2020.

The council can also implement compulsory purchase orders on derelict sites, and, in the past year, has bought 17 houses, most of which it has sold on the open market. The Derelict Sites Register does not contain a value of each property.

Currently, the most expensive site on the Vacant Sites Register in the city is the former Player Wills cigarette factory on the South Circular Road, valued at €23.8 million. Its neighbouring site, the former Bailey Gibson packaging plant, is also on the register, valued at €12.5 million. Players Square Ltd had permission to build more than 500 homes on the combined sites, which are now under the control of receivers Grant Thornton. The receivers are seeking buyers for the site.

Touch or hover over the blue or orange dots on the map to reveal value and other information about derelict and vacant sites.

Since January, local authorities have had the power to impose a levy on property owners who fail to develop prime housing land. The levy, set at 3 per cent of the value of the land for this year and 7 per cent for subsequent years, must be paid from 2019. More than €27 million could be raised by the four Dublin local authorities in 2020 through vacant site levies on land that could be used for housing, according to an analysis by the Department of Housing.

Although the charge applies to vacant sites nationally, the Dublin local authorities, particularly Dublin City Council, have been “the most active in implementing the levy provisions to date”, the department said.

Next year, when the 3 per cent charge will be payable, €7.5 million could be raised by the four Dublin councils. However, in 2020, when the rate increase to 7 per cent is imposed, Dublin local authorities are expected to raise more than €27 million to be used for “housing or regeneration purposes”, the department said.

The department’s estimates are based on the sites currently listed on the register, 87 of which are in the Dublin City Council area, 13 in Dún Laoghaire Rathdown, eight in South Dublin County Council and six in Fingal. However, the department said it expected these figures, and the resulting pot of housing funds, to rise.

“It is expected that the number of registered sites in respect of which market valuations will be obtained will increase in the coming months which should result in an increase in the estimated levy proceeds nationally for 2020.”