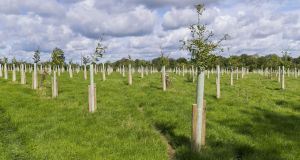 As the Government unveils plans to plant 22 million trees every year over the next two decades, Ireland’s forestry industry has rejected what it has called “misinformation” about the environmental impact of commercial sitka forests, citing new data which shows the extent to which they contribute to reducing carbon emissions.

Mark McAuley, director of Ibec’s Forest Industries Ireland (FII), the main body representing the sector, says Ireland’s forests are absorbing millions of tonnes of CO2 and are helping to lead the way in the fight against climate change.

They absorb the yearly CO2 equivalent to that emitted by 1.67 million cars or 655,000 homes on top of long-term carbon capture, according to FII analysis.

He has also strongly defended the widespread growing of sitka spruce in Ireland, which he describes as the workhorse of the forestry sector.

Climate change activists from the Extinction Rebellion group, which shut down a Dublin city centre street on Saturday, interrupted the recent FII conference in the Botanic Gardens. McAuley says they were mainly targeting Minister for Climate Action and Environment Richard Bruton, and his organisation was unfairly subjected to collateral damage.

It is essential that landowners “get a few bob out of it” to encourage more planting. Sitka is being planted “because there is a return in it”

He says forestry is “a big ticket item in fighting climate change” with the backing of the UN, wildlife broadcaster David Attenborough, the World Wildlife Fund and WHO.

“Let’s get real and do the thing that works,” he says, noting that it is essential that landowners “get a few bob out of it” to encourage more planting. Sitka is being planted “because there is a return in it”, he says.

A typical Irish forest would have 15 per cent of area for biodiversity, including corridors and pathways, and 15 per cent for broadleaf trees. “It’s over-egged. People look at it and say, ‘it’s all sitka’, but it’s not true,” he says. “A plantation is mixed now. There’s no such thing as a pure coniferous plantation.”

While the Government’s climate action plan, published in June, proposed 8,000 hectares – or 19,768 acres – of new forestry every year in a bid to capture carbon emissions, it did not specify the number of trees involved. In its latest calculations, it suggests this will involve 2,500 conifers or 3,300 broad-leaf trees for every hectare planted. The target is for 70 per cent conifers and 30 per cent broad leaves.

McAuley says current planting rates in Ireland are not what they should be – it would be lucky if 4,000 hectares were planted this year. There are systemic and policy blockages preventing the sector reaching the higher rate though he believes it can be done.

Currently, there is a pinchpoint, which can be resolved only by getting 21,000 farmers back involved in forestry, McAuley says.

McCauley says he has no problem with people saying they don’t like big swathes of sitka in their communities; that they prefer looking out on traditional landscapes, but he objects to “falsehoods, such as it’s no good for climate change”.

“Managed forests are particularly good at absorbing CO2 as they grow fast and when they are felled, the CO2 is stored in long-life timber products. Then the trees are planted again and you get a second load of CO2 being taken out of the atmosphere.

“There are 770,000 hectares of forestry in Ireland, or 11 per cent of the country. As they grow, these trees absorb an extra 3.6 million tonnes of CO2 each year from the atmosphere which equates to the amount of CO2 emitted by almost 655,000 homes. Put another way, that’s the equivalent of taking over 1.67 million cars off the roads.”

Forests are a natural carbon capture and storage system that will benefit the whole world for generations to come, he adds. “Forests clean the air that we breathe. Trees suck up carbon as they grow, lock it into timber products and displace less environmentally-friendly products.”

Houses all over the country are built with our sitka spruce. If we did not produce timber, we would have to import it

More carbon-intensive building products such as steel and concrete are being displaced by using timber to build. “We should certainly be building our houses and civic buildings with timber, and great progress is being made in the design and technology of large timber buildings.”

Current building standards limit timber buildings to three storeys, notwithstanding the performance of cross-laminated timber. London, in contrast, allows timber buildings of up to 12 storeys, he notes, while the portion of timber, such as wood chip, used for bioenergy is displacing fossil fuels.

Ireland has the best conditions in the world for growing trees backed by a world-class forest industry, he says. “Sitka spruce tree grows fast and is what we need to produce construction timber. Houses all over the country are built with our sitka spruce. If we did not produce timber, we would have to import it. Sitka is the workhorse of the forestry sector; it is often compared to the Friesian cow for the Irish dairy sector, given the thousands of jobs it has helped to create in rural Ireland.”

The national forest estate absorbs an additional 3.6 million tonnes of CO2 every year; enough to cover the emissions from 60 per cent of the cars on Irish roads.

Every cubic metre of timber product stores about 1 tonne of CO2.

The “timber mobilisation value” or money that will be earned by forestry owners, timber hauliers, forestry workers and contractors in Ireland between 2017-2035 will be €6.45 billion (FII analysis).

Total employment in the forestry sector in Ireland is some 12,000 people, and expected to grow to 18,000 with expansion in line with the Government’s climate action plan.