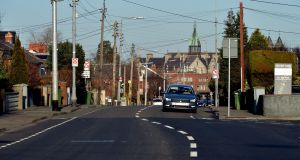 Front gardens and trees in south Dublin could be saved under new BusConnects designs that restrict cars in Kimmage Village.

The National Transport Authority (NTA) has produced a new public realm design for Kimmage that would eliminate the need to annex parts of front garden and fell trees, following protests earlier this year by residents.

However, it would have to introduce two “bus gates” to Kimmage Road Lower, banning through-traffic for a 2km stretch, to ensure buses were not caught in jams.

The original plans for the number 11 core bus corridor involved the widening of lower Kimmage Road south of Sundrive Road from two to four lanes, to accommodate a dedicated bus lane and general traffic lane in each direction.

The plan would have resulted in the felling of mature trees, and the removal of on-street parking and parts of front gardens would have been required to accommodate the extra lanes.

The NTA has put forward new designs, that include additional tree planting, the removal of some parking, the reduction in speed to 30km/h, and the widening of footpaths, but retain only two traffic lanes.

To achieve this, general traffic would be restricted by bus gates at the junction of Kimmage Road and Harold’s Cross Road near Harold’s Cross Park; and south of Kimmage Village, near the junction of Terenure Road West. This would mean commuter traffic could not use Kimmage Road Lower as a direct access route to and from the city centre, but local traffic could use side roads to reach the centre of Kimmage.

The NTA said the bus gate would be governed by signage, but it would consider seeking camera enforcement if the system was not respected.

Fianna Fáil city councillor Deirdre Conroy said while the NTA had gone to more effort than previously, it did not appear there were sufficient improvements for cyclists, as they would be sharing the bus lane. Businesses in the village would also be losing some parking outside their premises.

There was also a risk of a “log jam” of displaced traffic on to neighbouring roads, particularly Clareville Road and Larkfield Park, she said. However, of greater concern, was that the impact of the nearby bus corridor on Crumlin residents had not been addressedm she added.

A spokeswoman for the NTA said not all corridors provide the “space or opportunity for large scale public-realm enhancements”. The designs were a “work in progress” and preferred route options would be published in November.

1 Election 2020: 10 key questions to ask candidates on your doorstep
2 Election 2020: Peter Casey to stand in both Donegal and Dublin West
3 Which jobs do teenage girls and boys aspire to have by age 30?
4 Eating out in Dublin – the homeless way
5 Eyewitness to Auschwitz: ‘We were held in the wagons like animals’
Real news has value SUBSCRIBE