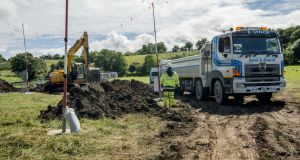 Some €18 billion is needed to improve Irish water infrastructure, including supply systems and wastewater treatment facilities, and to bring it up a reasonable standard, according to Irish Water.

The current state of Irish Water’s assets, however, and “the scale and duration of the investment challenge” meant “large-scale service failure is unavoidable from time to time”, its managing director Jerry Grant told the Oireachtas Committee on Housing, Planning and Local Government.

This was particularly the case with extreme weather events, and sudden major pipe bursts. In addition, climate change would present particular challenges in future in the form of drought or flooding, he said in a submission to the committee on the utility’s response to national emergencies.

Irish Water has enhanced its incident management procedures and the way it provides alerts and updates for those affected by loss of water supply in emergency situations, he said. This follows its evaluation of its response to major storms – such as Ophelia and Emma – and major pipe bursts affecting large number of people.

It has also improved arrangements for the dispatch nationally of standby road tankers, emergency supplies of bottled water and one tonne water containers held in central locations.

Improvements identified as a result of the incident last July in Staleen, Co Meath, when a major pipeline supplying 70,000 people was disrupted for up to a week, were implemented successfully during recent severe weather events.

Keeping its customers informed was a significant challenge during emergencies, when events were unfolding and response teams were faced with unpredictable circumstances, he added, but its approach to vital communications had been improved.

“As we have gained experience in these situations, we recognise the value of utilising the local knowledge of elected members and community groups,” Mr Grant told the committee.

Irish Water was now working closely with ESB Networks to track outages and to understand when affected areas could be brought back online. This enabled it to prioritise sites impacted by power outage, co-ordinate deployment of generators where outage is prolonged and to advise households and businesses of likely timings for supply restoration with greater confidence.

A new programme would replace pipelines that burst frequently and have a disproportionate impact on communities, he said. A total of 800km of pipeline had been replaced in recent years. In addition to the poor condition of pipes, many were located too close to surfaces and were vulnerable when freezing conditions arose.

They were also developing a national telemetry system which transmits data from remote locations to its national control centre. Access to immediate real-time data like water production rate, reservoir levels and trunk main flows, would greatly enhance the effectiveness of crisis management during emergencies in future years, he said.