Seeds of an idea: saving our crops for the future 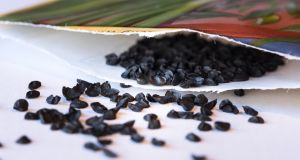 “What if 80 per cent of our food crop varieties become extinct? Well, they already have.” This is the stark introductory sign that people read on arrival at the Irish Seed Savers Association (ISSA) gardens and orchards in Capparoe, Scariff, Co Clare.

Many chefs and horticulturists argue that the small variety of fruit and vegetables for sale in supermarkets has narrowed our taste buds and taken from us a richness we don’t even know we’ve lost. The move away from seasonal consumption has also created a demand for imported fruit and vegetables whose taste is often diminished by early harvesting and long transportation routes.

“In the shops, we get about five different types of potato, two types of tomatoes and one type of cucumber so we can’t choose tastes that we enjoy,” says Flora Barteau, the seed coordinator at the centre. “Our aim is to continue to grow varieties that are well adapted to the Irish climate for people to buy and grow themselves.”

More than 450 people from all over Ireland travelled to the recent ISSA open day to take tours of the apple orchards and see drying racks full of seeds, from cereal crops such as oats and rye and vegetables including parsnip, beetroot and sugar peas.

Visitors of all ages climbed the gently sloping gardens to get close to 170 varieties of heritage apple trees and taste freshly picked tomatoes, potatoes and apples.

“Our mission is to get these apple varieties back out into gardens across Ireland. We have about 30 per cent eating apples and 70 per cent cooking apples, which reflects our self-sufficiency in apples in the past,” says Eoin Keane, the nursery co-ordinator.

The association’s nursery is the only one in Ireland where you can see the apple trees growing in orchards and taste the apples before you purchase a tree. Potential apple tree growers can return on September 8th and 9th and October 13th and 14th to taste the mid- and late-season apples and to study the trees before deciding what size and variety to plant in their gardens.

Collecting heritage apple trees was where American seed saver Anita Hayes started on this modest site more that 20 years ago. Since then, the ISSA has saved seeds from 600 heritage vegetables and 48 heritage grains. The organisation works with the genetic resources division of the Department of Agriculture every year to grow out specific vegetables, grains and fruit to maintain a genetic diversity for future generations.

Spreading the message about the importance of open-pollinated seeds (see panel below) is key to the entire operation, according to Jennifer McConnell, the association’s recently appointed general manage. “A lot of our food is imported, and we only question this when there’s a shortage. We want more growers, schools, community and allotment gardens to use our seeds to grow Irish heritage vegetables.”

Horticulturist Jason Horner says it took him many years to start saving seeds. “I had been using hybrid seeds for growing vegetables, and I never really fully got it about open-pollinated seeds. Then in 2010, American seed saver Matthew Dillon came to Ireland to talk about saving seeds. The following year, over 15 growers did a course on seed saving, and the Irish Seed Savers Association guardians grew from that.”

Horner’s light-bulb moment was when, as an ISSA seed guardian, he grew out “Tipperary Turnip” for seed in a 30 metre row in his garden. “I had previously saved the tubers to grow potatoes, dried beans and peas on the stalk [with final indoor drying], but when I grew out the turnips for seeds, I had enough seeds that everyone in Ireland could grow a turnip.”

At a public talk at the association’s open day, environmentalist Duncan Stewart emphasises how growing a wider variety of crops can protect us against changing weather patterns.

“The ISSA is building resilience as the biggest collector of rare seeds in Ireland. The more variety of vegetables we all grow in different soils and climatic conditions, the greater impact on biodiversity. Open-pollination helps the whole ecosystem. We need more training for growers to understand these issues and we need community gardens and county councils to use heirloom seeds,” he says.

Stewart also highlights the potential impact of the flooding of the global seed bank on the Norwegian Svalbard Islands earlier this year. Although the frozen seeds (donated from and available to people all over the world in the future) weren’t damaged, Stewart says the melting of the permafrost was another reminder of the risks to future food supplies we face with climate change.

Another speaker at the event, Madeleine McKeever from Brown Envelope Seeds (which also sells open-pollinated seeds), says we urgently need legislation on the country of origin of seeds, and we need trials of different varieties of organic vegetables in this country.

“Currently, there is no way of knowing where seeds come from and there is nowhere in Ireland to see different types of vegetable growing to help you decide what to grow,” she says. More than 90 per cent of seeds available in Ireland are currently imported.

Film-maker and photographer Lisa Fingleton travelled to the open day from her smallholding in Kerry. “The problem now is that most people don’t know the real taste of home-grown tomatoes. They have lost the connection with the earth, and become obsessed with germs – which has made our food sterile.”

What’s the difference between open-pollinated and hybrid seeds?

Open-pollinated seeds are seeds that are collected directly from the plant which has “gone to seed”. This process takes a variable length of time, depending on the vegetable. So, for example, when peas and broad-bean pods turn black on the stems, you can open the pods, remove the seeds and dry them indoors.

“We have to imitate the rotting process to get the best seeds. So we leave the seeds on the plants for as long as possible. Once they are ready to harvest, we put them in our seed bank,” says Flora Barteau, the association’s seed co-ordinator.

It’s a labour-intensive process, and all seeds are then hand-picked, placed on drying shelves and put into brown envelopes to sell. Anyone who buys open-pollinated seeds can then continue the seed-saving process by letting some of their crops go to seed and using these seeds to plant further crops. Kept in the right conditions, these seeds can last for years.

This process of growing crops with open-pollinated seed was the norm until agriculture became industrialised in the late 19th century. In the search for higher yields and crops resistant to disease, hybrid seeds were developed. Now the majority of farmers and other growers buy hybrid seeds, together with fertilisers and pesticides every year, rather than saving seeds from their own crops.