Households should be paid for their solar energy – report 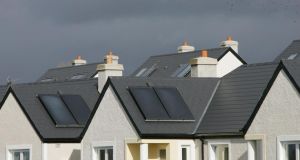 The Government’s long-awaited move to incentivise the scaling-up of solar energy development in Ireland should not exclude individuals and small businesses who wish to avail of an opportunity to reduce their energy costs by installing rooftop panels.

That is among the recommendations of a report by the climate expert Joseph Curtin published today.

The report was commissioned by Friends of the Earth, which is concerned the incentive scheme due to be announced shortly by Department of the Environment “may not cover micro/rooftop installations, and may not adequately address barriers to citizen participation” in solar panel deployment.

The cost of solar photovoltaic (PV) panels, which generate usable solar power by means of photovoltaics technology and associated electricity storage batteries, has dropped dramatically in recent years. The panels absorb and convert sunlight into electricity with the help of an inverter that changes electrical current so that it can be used domestically or added to the national grid.

The report evaluates solar industry trends in the UK and Germany, and rejects suggestions that domestic rooftop solar energy would be too costly or favour wealthy households.

“The initial period of support is necessary so that the technology matures in the Irish market, and to ensure that Ireland can benefit from dramatic technology cost reductions anticipated over coming decades,” said Mr Curtin, a research fellow at UCC and member of the Government’s climate change advisory council.

While solar PV is a “potentially disruptive technology to incumbent business models”, notably those used by utility companies that generate or distribute electricity, “it must be embraced, not blocked, because it offers many benefits for citizens, and is a potentially vital component of the flexible and responsive energy system of the future”, the report adds.

“Supporting the industry at this early stage will ensure that a qualified cadre of project developers and technology experts emerges, and a technology supply chain is developed,” it says.

While larger schemes offer economies of scale and lower transaction costs, “the argument in favour of household rooftop solar is based on the fact that householders save energy which would otherwise be paid for at the rate of the peak electricity tariff for residential customers”.

A renewable electricity incentive scheme proposal being considered by the Government includes provision for commercial rooftop solar development in addition to “on ground” projects, The Irish Times understands – but “it’s not a carve-up” in favour of big developers and large energy companies.

“The introduction of a subsidy for rooftop solar PV ... is vital for development of the type of grid and energy system that can deliver national decarbonisation [reducing CO2 emissions] at least cost and maximum benefit over coming decades,” said Friends of the Earth director Oisín Coghlan.

The financial analysis refutes common “anti-solar” arguments, he said. “The Government has promised to put citizens and communities at the heart of the transition to a clean energy system. This research shows solar power is key to unlocking citizen participation. Paying households for the solar electricity they generate can be done at a reasonable cost and in a fair way.”

Mr Coghlan said the Taoiseach Leo Varadkar had signed the Friends of the Earth petition for a fair payment for solar power, and Minister for Climate Action Denis Naughten had indicated support for rooftop solar energy.

He added: “We’re really concerned that economists with no interest in public participation and big power companies who want to keep the market to themselves are telling the Government not to pay households and communities for the electricity they generate; to leave it to the big boys to provide Ireland’s renewable energy. We have seen the limits of that strategy with wind power. We don’t want to repeat the same mistake with solar energy.”