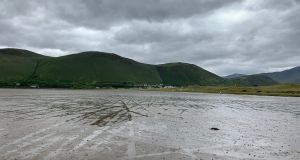 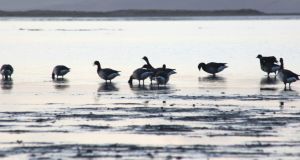 Brent geese feeding at Reennanallagane near Rossbeigh strand in Co Kerry where there are healthy levels of seagrass to feed on. Photograph: Coastwatch Kerry

As estimated 7 per cent of seagrass habitat is being lost worldwide each year, according to a UN Environment Programme (UNEP) report, which warns the decline is undermining Earth’s ability to build resilience to climate change.

At least 22 of the world’s 72 seagrass species are in decline, including two around the Irish coastline. Such plants which grow in marine environments are 35 times more efficient at capturing and storing carbon than tropical forests.

Seagrass meadows “can be a powerful nature-based climate solution and help sustain communities” reliant on healthy marine ecosystems, according to the report published on Monday to coincide with World Oceans Day.

The report finds seagrass ecosystems “play an outsized role” in combatting the climate crisis. “Though they cover only 0.1 per cent of the ocean floor, these meadows are highly efficient carbon sinks, storing up to 18 per cent of the world’s oceanic carbon.”

Seagrass meadows “nurture fish populations, weaken storm surges, and provide numerous other services to coastal communities”, it adds. They “are biologically rich and highly productive, providing valuable nursery habitats to more than 20 per cent of the world’s largest 25 fisheries. They can filter pathogens, bacteria, and pollution out of seawater, and are home to endangered and charismatic species such as dugongs, seahorses, and sea turtles”.

Marine ecologist and Coastwatch director Karin Dubsky said she was worried about the state of seagrass ecoystems in Ireland; “perhaps the most important carbon sink in our marine areas”. This was most obvious in Dublin Bay including Bull island and Merrion strand, as well as in Bantry Bay and on Rossbeigh strand in Co Kerry.

The deterioration was already confirmed in the 2020 Coastwatch nature and climate survey which began at the weekend and runs up to June 21st.

Zostera is the dominant form of seagrass around Ireland with two species recognised; Zostera marina which is mostly found under water and the intertidal Zostera noltii, she said.

In both instances there was inadequate protection of coastlines, reflected in cars and horses being allowed onto vulnerable areas.

Seagrass became “highly stressed” last year with temperatures of over 30 degrees found in coastal mudflats where it grew, she said, which underlined the need for conservation, sustainable management and restoration. A system of “priority habitats”, which existed in other countries, was the best way to protect carbon sinks and enhance biodiversity, she added.

Commenting on the UNEP report lead editor Dr Maria Potouroglou said: “Seagrasses are the super ecosystems of our oceans, providing an incredible range of benefits to people around the world. Yet, while their flashier counterparts attract more attention, they remain among the most unheralded aquatic environments on Earth... seagrasses help people thrive and sustain the healthy natural environment that we all depend on.”

In the North Atlantic, seagrass provides critical habitat to juvenile Atlantic cod, a major commercial species that is fished by fleets from more than a dozen nations, including Ireland.

Despite their importance, seagrasses are among the least protected coastal habitats, the report adds. Only 26 per cent of recorded seagrass meadows fall within marine protected areas compared with 40 per cent of coral reefs and 43 per cent of mangroves.

Fianna Fáil proposed an Oceans Act earlier this year, he said, “which would see increases to both the number of protected areas and the levels of protections afforded to them”.

In spite of the importance of the Irish marine environment, “we are nowhere near the 2020 target to have 10 per cent of marine area designated”.

He said “an Oceans Act would mean that we would be far better placed to meet our commitments in 2030”.