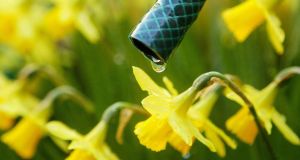 The State is facing a second hosepipe ban in the space of two years. File photograph: Gareth Fuller/PA

A second hosepipe ban in two years is likely, why is this happening?

It is hard to reconcile that vast tracts of the country were subjected to extreme flooding in late January and early February while four months later we are facing a likely hosepipe ban for the coming summer – the second such ban in two years.

Such extremes, however, are exactly what is predicted for Ireland in a world which month after month is seeing record temperatures due to carbon emissions derived from human activity.

A combination of prolonged flooding episodes in winter and more frequent (and longer) summer heatwaves are forecast for the country, as well as extreme weather events in the form of storms that are more intense.

At this point, we are in the midst of a prolonged drought, with nothing in mid-range weather forecasts to suggest it will end soon.

Once again, it has exposed the country’s vulnerability due to cavalier attitudes among consumers about the need for water conservation and poor “resilience” in the water supply system – a problem that is most acute in the greater Dublin region.

What does the data indicate about our weather this year?

Met Éireann records show we have had 37 dry spells (15 consecutive days with less than 1mm of rain) in the past two months. Data covering more than 30 years shows that we would normally only have about 37 dry spells over the course of a year in Ireland, according to the Water Forum, a statutory advisory body.

The Dublin region has had its driest spring since 1837, at a time when the need for extra hygiene to combat Covid-19 has resulted in a 20 per cent greater demand for water.

What’s more, according to analysis by Irish Climate Analysis and Research Units (Icarus) in Maynooth University, drought conditions now are more extreme – and earlier in the year – compared with 2018.

“Truly remarkable is the fact that combined rainfall totals for April and May 2020 rank as the driest consecutive two months ever recorded at Phoenix Park, the longest running continuous series in the Republic,” it notes in its latest monitoring blog.

Prof Fiona Regan of DCU Water Institute has been tracking water levels since mid-March; they are now 10 times lower than over the previous five years. Typically, water availability in Dublin and the eastern region has been on average just 1 per cent above demand.

There is every likelihood the extent of drought and water shortages is being exacerbated by climate disruption driven by CO2 emissions – though heatwaves can be a feature of natural weather patterns.

How can a country with plenty of rain end up having to restrict water usage?

The State’s water supply issues are twofold. The first issue is poor water-supply infrastructure, as indicated by high levels of leakage concentrated in the area of biggest demand: the Dublin region.

The capacity to maintain supplies in the capital is on a knife-edge, with an overreliance on water taken from the river Liffey. Latest indications suggest that 45 per cent of Dublin’s water is lost due to leaks.

“There has also been a disappointing drop-off in the number of leak repairs completed under the First Fix Scheme from mid-2016,” the Government’s Water Advisory Body warned earlier this year. “By any measure, Ireland’s leakage rate is unacceptable,” it added.

The second issue evident across the country is lack of routine water conservation, reuse and recycling while water remains free for householders. Evidence has shown the lack of a water charge leads to overuse, and our current regime in this regard puts us at odds with most modern economies.

What are the risks from prolonged water shortages?

Due to the threat from coronavirus, water is critical to reducing spread of the virus; washing your hands is a key preventative action – and will continue to be so, inevitably increasing demand for water.

The threat, however, goes much further. Extended dry weather amid continued demand will result in lower water levels in rivers and lakes which are the source of public drinking-water supply for more than 80 per cent of the Irish population, the Water Forum notes.

Lower water levels mean there is less water to dilute pollutants, so discharges to rivers and lakes will be able to cause deterioration in water quality, with resulting impact on flora and fauna. Low water levels impact on “recharge rates” for groundwater sources and this can impact on water supply to small private supplies.

How are the State’s water supply issues going to be solved?

Irish Water is currently preparing a National Water Resources Plan that aims to ensure a sustainable, secure and reliable water supply for the next 25 years. This will assess the amount of water available in our rivers, lakes and groundwater systems and calculate the demand from businesses and homes.

It will also factor in the impact of climate change on the geographic distribution of water resources. Piping water from the Shannon river south of Lough Derg will be the utility’s key action towards solving Dublin’s supply difficulties, though that is likely to cost in excess of €1.6 billion and won’t solve the city’s leakage problem.

Irish Water has an extensive programme of repairing leaking pipes, though cost factors and disruptions in busy urban areas mean it’s a far from straightforward task. Those favouring more aggressive efforts to tackle leakage point to less disruptive and more technologically advanced options now available for use in big cities.

Conservation has to be part of the mix – a national conversation on this is long overdue.

What is the immediate outlook from here?

It is important to note this drought is ongoing. The numbers are exceptional to date and large soil moisture deficits exist, Icarus notes. There are obvious implications for agricultural production, especially in the form of likely fodder shortages.

It will take a considerable amount of rain to bring this drought event to an end. Continued dry conditions will make the 2020 drought an even more remarkable event than in 2018, when the first water conservation order (hosepipe ban) was introduced. While forecasts for the coming weeks show some chance of rain, the totals for now look to be small.

The longer-term seasonal forecasts for this summer, while uncertain, suggest a drier and hotter summer than average over western Europe, Icarus predicts.

While the drought of 2020 is more limited in spatial scale so far, affecting the east most intensely, the unfolding situation needs to be carefully monitored. Unlike in 2018, we now find ourselves in the midst of a global pandemic where water has taken on a new public health importance and created new vulnerabilities.

Longer term, the Irish climate is projected to warm across all seasons, with every indication that living with regular hosepipe bans will be an inevitable consequence.