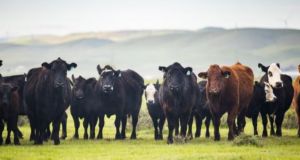 The parties in government-formation talks ‘must not shirk from cuts in methane and nitrous oxide arising from farming’.

Any programme for government needs faster reductions in agriculture-linked emissions and not provide opt-outs based on faulty science, according to Stop Climate Chaos (SCC).

The parties in government-formation talks must not shirk from cuts in methane and nitrous oxide arising from farming, the coalition said in a briefing document on the role of agriculture in Ireland’s climate action plans.

“If Ireland is going to reduce our total [carbon] emissions by at least 7 per cent a year, as called for by the UN Emissions Gap report, then agricultural emissions can’t keep rising as they have for the last decade,” said SCC policy adviser Sadhbh O Neill.

Fine Gael, Fianna Fáil and the Greens have provisionally agreed overall emissions will reduce by a yearly average of 7 per cent.

While nobody expected farming to cut emissions as fast as other sectors, agricultural emissions needed to fall from about 20 million tonnes a year to about 12-15 million tonnes, Ms O’Neill said – an additional saving of four to six million tonnes compared with current plans.

Even then, the rest of the economy and society will have to cut emissions from 40 million tonnes to 15-18 million tonnes, “so this is a very good deal for agriculture”, she said.

“We need to see reductions in methane and nitrous oxide gases. Nothing else counts as real mitigation,” she said. Without an enforced limit, the market incentive will simply continue to drive up herd numbers and emissions, the analysis concludes.

Recent scientific publications propose a new way of accounting for methane that captures its warming impact more accurately, but “it’s mistaken to suggest the shorter lifecycle of methane in the atmosphere, by comparison with CO2, implies that control of its emissions is somehow less important”, Ms O’Neill said.

“Though an emission of one tonne of methane in 2018 will have long since been removed from the atmosphere by 2118, it will still have been responsible for 34 times more heat trapping than the tonne of CO2 emitted at the same time.”

Research by Oxford Martin group has been misrepresented by some sectoral interests who seek to downplay methane’s role in climate mitigation strategies, she claimed.

There were indications some political parties in the talks were seeking special exemptions for agriculture on the basis that soils, hedgerows and marine kelp forests can absorb emissions from livestock, but this was of limited benefit, the SCC analysis says.

Land use in Ireland was a net emitter, which had to be addressed, Ms O’Neill said. “Even when carbon sequestration is taken into account, we are still emitting more greenhouse gases from land-use and land-use change than we are absorbing.”

“Such measures can be highly beneficial for biodiversity and soil health if planned appropriately but are of limited benefit to near-term climate mitigation,” according to Dr Elaine McGoff, natural environment officer with An Taisce.

Meanwhile, a newly formed alliance of health charities and medical organisations has said inaction on climate change in Ireland was a “major threat” to public health.

The Climate and Health Alliance, an all-island organisation comprising 14 members, is seeking a major escalation in measures to deal with air pollution, “toxic” built environment, sedentary lifestyles, and unsustainable diets.

In its blueprint document to the political parties partaking in government-formation negotiations, the alliance has called for the establishment of a Clean Air Act, which would include an “immediate” nationwide ban on burning of smoky fuel and diverting “at least” 20 per cent of the national transport infrastructure budget to public transport.

Tim Collins, chief executive of the Irish Heart Foundation, one of the members of the alliance, said the country had a “huge opportunity” to create “significant public health benefits” by tackling climate change.

Mr Collins, who is a doctor, said the Covid-19 crisis had brought this issue into “sharp focus”.

“There’s a belief that there’s a relationship between Covid-19 and air pollution but there is absolutely a direct and proven link between air pollution and cardiovascular disease, cancer and a range of other respiratory diseases,” he said.