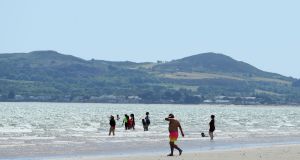 Dublin had its sunniest month on record in May, with almost 300 hours of sunshine recorded, the national forecaster has said.

In its monthly climate report, Met Éireann said the Casement Aerodrome station in Co Dublin recorded 293.5 hours of sunshine, the highest ever recorded in its 56-year history.

The highest number of daily sunshine hours recorded this month was 15.3 hours at Johnstown Castle, Co Wexford on the 31st of May.

Phoenix Park experienced its driest May since 1991 with 8.3 mm of rain for the whole month, while Cork Airport had the highest rainfall total with 68.8 mm.

Five stations experienced dry spells between the 1st and 20th of May, such as Oak Park in Co Carlow, Shannon Airport in Co Clare, Dunsany in Co Meath, Mullingar in Co Westmeath and Johnstown Castle in Co Wexford.

The number of very wet days ranged from zero days at most stations to three days at Cork Airport.

Mean temperatures for the month ranged from 10.9 degrees at Dublin Airport to 13 degrees at Shannon Airport, Co Clare.

The month’s highest temperature was reported at Mount Dillon, Co Roscommon on the 30th with a temperature of 26.8 degrees, which is 11 degrees higher than its long-term average.

Overall, May was another very dry and settled month, with rain below average and temperatures above average across the country.

The weather was cooler in the first half of the month, but warmed up towards the end of the first week, with some thunderstorm activity on the 9th.

The second half of the month was milder overall, with widespread rain between the 21st and 23rd, particularly in the southwest of the country.

It settled down again from the 24th with high pressure building from the south and drifting over Ireland towards Scandinavia, which brought a tropical continental air mass over Ireland from the southeast, keeping it mostly dry and very warm up to the end of the month.

The monthly climate report comes following warnings from Irish Water about the possibility of a conservation order due to unseasonably dry weather and an “unprecedented demand” for water.

On Tuesday, the utility said 16 water supplies are already classified as at “drought” level, while a further 38 are “pending drought”.