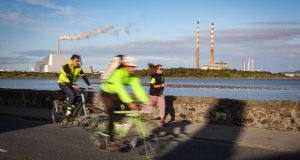 Residents of Sandymount in Dublin are urging An Bord Pleanála to intervene to halt the development of a two-way cycle path on Strand Road.

The route, which limits traffic on the coastal road to one lane, is due to open in February for a six-month trial. However, several residents groups say they believe the council’s proposal requires planning permission and are preparing a submission to ask the board to adjudicate on the issue.

Legal representatives for the groups, which include STC ( Serpentine Avenue Tritonville Road, Claremont), Samra (Sandymount & Merrion Residents Association) and several associations representing individual roads in Sandymount, have written to Dublin City Council advising it should not go ahead with the cycle trial in advance of the board’s ruling.

However, the council said the cycle path was exempt from requiring planning permission. The project was in line with Government advice to implement walking and cycling schemes during the Covid-19 pandemic, it said. The council had engaged independent consultants who confirmed there was no requirement for environmental assessments which could trigger an application to An Bord Pleanála, it said.

Councillors will on Monday be told that following the communication from the residents’ groups, the council would seek further advice on the issue before implementing the trial next month, but it believes “it is correct to proceed with the scheme as originally advised”.

Fine Gael councillors Paddy McCartan and James Geoghegan and Labour councillor Dermot Lacey will on Monday propose an emergency motion calling on Minister for Transport Eamon Ryan to revive a 2015 plan to construct a cycle path on a boardwalk over the sea side of Strand Road, instead of on the road itself.

The motion also “resolves to reduce the current community divisions that have arisen as a consequence of the proposed trial by whatever means necessary”.

While several residents groups are opposing the council’s cycle plans, almost 3,000 people last year responded to a public consultation process on the proposal, with 56 per cent “strongly in favour” of proceeding with the trial. Just over a quarter (27 per cent) objected to the trial, while 17 per cent stated they had some concerns.