Road users urged to be careful as weather warnings issued 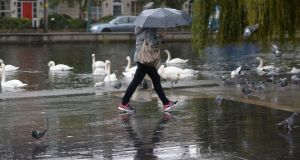 Motorists have been warned to expected severe rain this evening after Met Éireann issued two weather alerts for rain and bad weather.

The forecaster said heavy rain and strong easterly winds will hit the country on Sunday evening and continue into Monday morning.

The rain is expected to turn to sleet and snow on hills and some lower levels in the north of the country on Monday. The yellow weather advisory will remain in place until Monday at 6pm.

A second yellow alert, a rainfall warning, has been issued for counties Wexford, Wicklow, Cork and Waterford from Sunday at 6pm to midday on Monday.

Up to 40mm of rain is expected to fall over the 18 hours.

Temperatures are set to fall to zero degrees on Sunday night.

In the northern half of the country the highest temperatures on Easter Monday will be between 4 to 6 degrees. However, it will be warmer in the south with temperatures reaching 12 degrees.

Sunday will be dry with sunny spells in most places until the weather alert kicks in at the evening.

Met Éireann forecaster Harm Luijkx said the continuing cold weather in Ireland was the result of atmospheric turbulence which had forced the jet stream to drift to the north of Ireland.

During this winter and spring the jet stream had become disturbed and “Ireland is stuck on the wrong side of it”, he said.

He said a similar weather phenomenon in 2013 had also resulted in a colder than normal spring.

When the jet stream is over Ireland it brings the mild and wet weather normally associated with this time of year.