Red panda that went missing from Belfast zoo is found 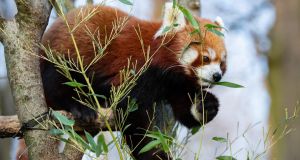 A red panda which escaped from a zoo in Belfast has been found safe and well.

Police said it went missing on Sunday and was believed to be “taking in the sights of beautiful Glengormley”.

A Belfast City Council spokeswoman said: “We are pleased to report that the red panda which escaped from its enclosure at Belfast Zoo on Sunday has been located.

“It is safe and well and has been returned to the zoo.”

The search had continued from Sunday into Monday, the panda was first sighted at around 5.30pm.

The spokeswoman added: “Local residents had been asked to report any sightings immediately to Belfast Zoo and we are grateful to members of the public who assisted with the search.”

Two panda cubs were born at the zoo in June last year but only started to venture outside towards the end of 2018.

Police searching for the animal had warned motorists to be vigilant as “our curious friend has not yet learned the green cross code”.

According to the International Union for the Conservation of Nature, the red panda is facing a very high risk of extinction due to habitat loss and illegal hunting.

Red pandas are mainly active from dusk to dawn and often sleep in high trees during the day. They have a distinctive red fur and long bushy tail, and are slightly larger than a domestic cat.

They feed mainly on bamboo but also fruit, eggs, small birds and insects.

1 Boy’s treatment by school over alleged thefts was ‘unbelievable’, judge says
2 Irish in Canary Islands: Life has changed dramatically
3 Pubs to stay closed until September at least as restrictions tightened significantly
4 Hume brought to Derry as candles in windows light his way
5 ‘This was like a nuclear bomb’: More than 2,700 injured in Beirut explosion
Real news has value SUBSCRIBE