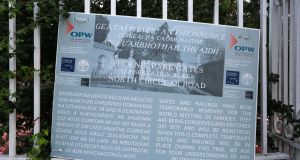 Historic gates of Dublin’s Phoenix Park, removed last year for the final Mass of the World Meeting of Families, have yet to be restored almost one year on from the pope’s visit.

The Office of Public Works (OPW) removed seven sets of gates, ranging in age from 113 to 186 years old, from the park ahead of Pope Francis’s visit last August when 132,000 Mass-goers came to the park.

The OPW said it intended to repair the gates, which it said were in need of “significant refurbishment” before replacing them. However, it has yet to seek tenders for the work and does not have a time scale for their reinstatement.

The oldest gates removed were at Islandbridge and Chapelizod entrances on the south side of the park, both of which date from 1833. At the park’s west end, the Castleknock gate (1834) was removed as were the Ashtown and Cabra gates on the north side, both installed in 1835. The newest gates taken down for restoration were at the North Circular Road entrance and at Blackhorse Avenue opposite Grangegorman Military Cemetery, which were installed in 1906.

Following the pope’s visit, plain stainless steel security gates were erected as a temporary measure, pending the reinstatement of the old wrought iron gates, and remain in place.

The OPW said the historic gates were removed for “health and safety reasons so as to ensure the safe and free movement of people and vehicles before and after the event”.

The gates had previously been removed and reinstalled for the Eucharistic Congress in 1932 and again in 1979 for the visit of Pope John Paul II. “Conservation practice and skills have improved dramatically since the gates were last removed in 1979 and so it is timely now to undertake the appropriate refurbishment of these important historic structures,” it said.

The restoration of the gates was “a major conservation project which is one of a number of projects ongoing across the heritage portfolio in 2019”. It said it hoped to tender for a contractor shortly.

“The public should be assured that the OPW will deliver this project to the highest conservation standards. While it would be desirable for the project to be completed as soon as possible, it is imperative that it is delivered to the highest standards.”

It did not know how much the restoration work would cost, but said it would fully fund the project.

Graham Hickey, conservation director with the Dublin Civic Trust, said the work must proceed as soon as possible . “The galvanised steel gates give a really unfortunate appearance to the park entrances. It is very important that the restoration work is done to the highest conservation standards, and that the gates are reinstated as quickly as possible.”