Madigan rules out plans to reintroduce hares to Bull Island 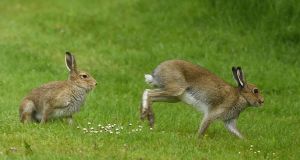 Despite being in abundance for decades, there have been no reported sightings of hares on the island over the past five years. Photograph: Ross Kinnaird/ Getty Images

Minister for Heritage Josepha Madigan has “no plans” to reintroduce hares to Bull Island, after dogs were blamed for the extinction of the animals from the world-recognised Dublin Bay nature reserve.

Despite being in abundance for decades, there have been no reported sightings of hares on the island over the past five years.

The Government has previously attributed their demise to disturbance by dogs.

Conservationists have repeatedly called for enforcement of environmental protections on the Unesco-designated site, where plans are under way to build a €10 million “discovery centre”, as well as a programme to reintroduce the native Irish hare.

However, Ms Madigan has categorically ruled out any imminent reintroduction.

Isolated populations “are especially vulnerable to extinctions”, she said, and international best practice suggests the present conditions on the island are not right for a reintroduction of the hares.

She pointed to guidelines issued by the International Union for Conservation Nature, which state the requirements for ensuring the reintroduction of extinct wildlife will “yield a measurable conservation benefit at the levels of a population, species or ecosystem”.

“Moving animals to Bull Island at this time would not meet those criteria,” said Ms Madigan.

“There are, therefore, no plans to reintroduce hares to the North Bull Island.”

Ms Madigan said her department would continue to work with Dublin City Council, the primary landowner of the 200-year-old man-made island, on managing the habitat.

She added they had not ruled out “the potential for a translocation of hares to Bull Island sometime in the future should conditions become more favourable for a long-term, sustainable hare population”.

Pádraic Fogarty, campaigns officer at the Irish Wildlife Trust, said Ms Madigan’s response to the extinction was “not good enough”.

“Bull Island is designated a Unesco biosphere, yet we still don’t see proper protection of the island,” he said.

“The issue of dogs, for instance, is going on for a long time. There was a baby seal mauled by a dog on the island last year.”

There is a ban on dogs being allowed off leashes on the island, under bylaws and the Wildlife Act, but it is routinely flouted. Mr Fogarty said the island was also littered with dog fouling and rubbish.

“We really need proper management. The island should have a warden, there should be a proper plan and investment,” he said.

Mr Fogarty said the extinction of the hares was “a terrible loss” and there “shouldn’t be an impediment to bringing them back”.

“We definitely have to reintroduce hares, but we also have to address the problems first,” he said.

“There is no point bringing hares back, if the problem with dogs is not sorted out.

“The dogs are also impacting on nesting birds and sensitive areas of important plant life.”

Dublin City Council has recently revived plans for a €10 million Unesco Dublin Bay discovery centre on Bull Island, which would aim to attract up to 60,000 visitors a year.

It is preparing to lodge a planning application in the form of an environmental impact assessment to An Board Pleanála later this year.

The council said the proposed building “positioned in the centre of the biosphere on Bull Island” would become “a landmark of national significance, designed to best international practice, highlighting the importance and uniqueness of the Bull Island and Dublin Bay”.