US election: How will the outcome affect the global climate crisis?

Analysis: Activists hope Biden victory would herald a fundamental shift in US policy

The upcoming US election has been described as 'the most important election in our lifetimes' by environmental scientists. Video: Enda O'Dowd 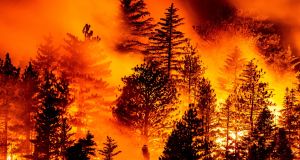 Fire progresses in the woods in the Angeles National Forest north of Monrovia, north east of Los Angeles, California in September. Signs -of ongoing climate change are all too apparent in the modern era. Photograph: Etienne Laurent/EPA

When it comes to the global response to the climate crisis, next Tuesday’s US presidential election is a critical juncture; the most significant crossroads since the Paris Agreement came into being in 2015.

A Biden win points to accelerated action by the country that has contributed most to global heating. He may be waving some form of green new deal (GND) but the US has much to do to prove its credentials.

A Trump win grants a reprieve for some of the world’s largest oil giants in a sector that has pumped most carbon emissions into the atmosphere and fostered climate science denialism. Critically, it would hamper global efforts to put green finance on a more robust – and sustainable – footing, to help to unlock the massive investment needed to achieve carbon neutrality.

For many climate activists the right outcome is a last ray of hope. Time is running out on avoiding irreversible impacts on the planet, in a year when Covid-19 conspired to blunt increased ambition due from wealthy states, while populist leaders continued to pedal fakery that was not only irresponsible but dangerous in the face of climate-driven extreme weather events and continuing temperature rise.

Biden has committed to spending $2 trillion on climate change abatement. The money, which doubles up as stimulus for a stricken economy, would not just fund research into clean energy but update America’s physical infrastructure.

He insists the Democrats’ GND is a crucial framework to embrace climate ambition “on an epic scale” while recognising “our environment and our economy are completely and totally connected”. He stresses, however, he has his own separate plan for reducing greenhouse gas emissions.

Biden promises to lead an international effort to get every major country to ramp up their climate targets and to make sure commitments are transparent and enforceable, and to integrate climate change into foreign and trade policy, as well as national security.

Trump’s policy is less substantive: an overriding priority of energy independence, where fossil fuels retain their dominance in the marketplace.

He claims Biden is going to destroy the oil industry, alleging his reference to “transition from the oil industry” is a game-changing gaffe. Oil and gas industry may continue to direct its formidable financial might to support him and Republicans, but there are telling signs of change – Texas is not all about oil and gas anymore.

Prof John Sweeney of Maynooth University, who has contributed to UN Intergovernmental Panel on Climate Change reports, agrees global climate action is at a pivotal point as the US is set to withdraw from the Paris Agreement within days.

If Biden wins, he believes he will immediately cancel Trump’s withdrawal application, and the US will rejoin the UN Framework Convention on Climate Change.

“This will cause a sea change in climate policy all over the US where Trump has ridden roughshod over the past four years.”

And it will be a game-changer for the world at a time when China has been dominant on the climate action front, while pointing the finger of blame at the developed world. It is important that the US joins with Europe in showing international leadership on decarbonising the world as a counterweight to this, he says.

Having green deals adopted in both the EU and the US would have a seismic effect, Sweeney predicts, especially in providing the technology to reduce emissions and act as “a tremendous stimulus for developing countries”.

Prof Anatol Lieven, specialist in geopolitics and author of the book Climate Change and the Nation State: The Realist Case, says the US elections “are certainly very important”.

“Another Trump term would stall any US federal climate action for four more years; though it would seem that some US corporations might continue to take action under pressure from public opinion and consumers,” he believes.

Biden would rejoin the Paris Agreement and take significant steps to promote alternative energy in the US. His administration might also link reduction of emissions by other countries to US trade policy and tariffs, creating wider incentives for change, Lieven adds.

“However, we should not be too optimistic. Both Biden and [Kamala] Harris are very late converts to serious climate change action. When challenged by Trump during the campaign, Biden backtracked on ending the use of oil by 2050 and backtracked on stopping further fracking,” he notes.

There is also the question of where a Biden administration would find the money for massive infrastructure investments “unless it is prepared to raise taxes substantially on a much larger swathe of the population than those earning more than $400,000 a year which is the lower limit Biden has stated for tax rises [or rather reversing Republican tax cuts]; or alternatively to pass laws mobilising bank capital for social investment”.

Moreover, even these limited steps would be largely frustrated if the Republicans can retain control of the Senate and use the supreme court to block legislation.

“So we should be hopeful for a Biden presidency, but only cautiously hopeful,” Lieven adds.