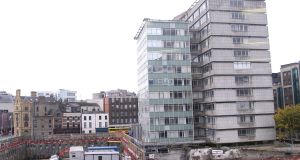 Hawkins House: An Bord Pleanála granted permission to the Office of Public Works three years ago for its demolition, and its replacement with an office complex. Photograph: Bryan O Brien/ The Irish Times

Demolition of Hawkins House, the former Department of Health headquarters in Dublin city centre, has finally started three years after it was approved.

John Tinnelly and Sons, the same firm that demolished the neighbouring Apollo House in 2017, has begun an 11-month programme to level one of the city’s least popular buildings.

The Office of Public Works (OPW) said the future of the site, at the corner of Poolbeg Street and Hawkins Street, has yet to be determined and will be subject to the availability of funds post-demolition. However, it is expected the site will be offered for sale.

Hawkins House, built from 1962 to 1964, is the last remaining building on a large city block which runs east-west from Tara Street to Hawkins Street, and north-south from Poolbeg Street to Townsend Street. Recently demolished buildings on the block include Apollo House, the Screen cinema, College House, the Long Stone pub and Brokerage apartments.

Apart from the Brokerage and the Long Stone pub, which were both built towards the end of the 20th century, all the other buildings on the block had been developed during the 1960s and 1970s.

Hawkins House was the oldest building on the site. Apollo House on Tara Street was built in 1969, the Screen cinema at the corner of Hawkins Street and Townsend Street followed in 1972, while College House – the former An Post building also on Townsend Street, came two years later in 1974.

The entire site, apart from Hawkins House, is owned by developer Pat Crean who acquired it in stages between 2015 and 2018.

In June 2017, An Bord Pleanála granted permission to the OPW for the demolition of Hawkins House, and its replacement with an office complex up to 10 storeys tall.

At the same time the board also gave the go-ahead to Mazars, which was at the time the receiver appointed by the National Assets Management Agency (Nama) to Cuprum Properties Ltd, to demolish Apollo House and the Long Stone pub and replace them with buildings from five to 12 storeys high.

Mr Crean was last month granted permission to increase the height on the Apollo House site to 21 storeys, with the addition of 54 build-to-rent apartments. Around the corner on Townsend Street, College House and the Screen will be replaced with buildings up to 10 storeys, which will include a 500-seat entertainment venue.

The demolition will progress in stages, with scaffolding erected around the entire building before it is demolished floor by floor from the top down. Preliminary construction work on Mr Crean’s scheme, which will be called College Square and will include shops, restaurants and cafes on the ground floor with offices and apartments above, is expected to begin in the coming weeks.