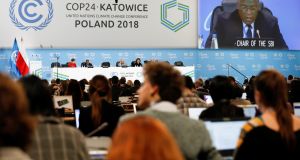 The global rise in greenhouse gas emissions over the past year has been driven by increased use of coal to generate power and heat, the UN climate talks in Katowice was told.

About 3.5 billion tonnes of coal are currently burnt globally for power and heat every year, contributing to 45 per cent of the world’s emissions.

Stopping new investment and unravelling old investment was critical to the success of the Paris Agreement on climate change, according to Nick Mabey, director of the climate change think tank E3G.

Speaking at a Powering Past Coal Alliance (PPCA) event, he said commitments and promises were not adding up.

“We will all need to get off coal if we are to meet the ambitions of the Paris Agreement,” said Catherine McKenna, the Canadian environment minister who is leading the global alliance with her UK counterpart, Claire Perry.

The alliance, which promotes the switch from coal to clean energy, is made up of states, regions and businesses including large utilities. Ireland joined earlier this year and Senegal, Israel, Scotland, the cities of Melbourne and Sydney, and ScottishPower were announced as new signatories on Thursday, bringing the number of members to 80.

The international effort was already making a difference, though closure of plants was hard on workers and communities, she said. In Ontario, “the decommissioning of coal-fired power plants saw the province reduce the number of smog days from 53 to zero. At the same time, ensuring a just transition for our coal workers and communities is a priority”.

Ms McKenna confirmed Canada is investing up to $275 million (€242m) through the World Bank to further advance global efforts to phase out coal and to help developing countries, particularly in Asia, increase renewable energy alternatives.

She was repeatedly heckled by anti-fracking protesters in the audience, who questioned the UK’s switch to gas and the use of what they claimed to be unsustainable imported biomass in power stations.

In response, she said the UK had led the world by decarbonising more than any other country, while the move to gas had coincided with a reduction in emissions.

Later, Aaron Pedrosa of the Philippine Movement for Climate Justice interrupted proceedings to point out that Ireland was a PPCA signatory, and yet one of its companies – ESB International – had been given a 10-year contract to operate a large new coal-fired power station in Quezon province.

While he underlined the Irish Government was not funding the coal plant, “countries including Ireland should not be profiting off the misery being experienced by communities” from coal plants in the Philippines.

He accepted the alliance was “a breath of fresh air” but such a scenario “defeats the PPCA principles”.