Residents of Sandymount, Dublin are concerned about a proposed new two-way cycle track on Strand Road, which will turn the Dublin 4 road into a one-way street for general traffic for more than 2.5km. Video: Bryan O'Brien 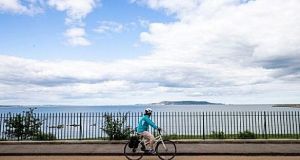 Proposals to introduce a two-way cycle path in Sandymount, south Dublin, have been deferred until the start of next year, following opposition from local residents.

Dublin City Council had intended to restrict vehicles to a single lane on Strand Road, to allow for a two-way cycle path to be introduced.

The coastal cycle path would be segregated from traffic with bollards and would look out onto Dublin Bay. The one-way traffic lane would run southbound from Seán Moore Road, near Irishtown Stadium, to the Merrion Gates.

The proposal has been met with opposition from some local Sandymount residents, who are concerned over potential increased traffic through the village and on smaller residential roads.

The changes were due to be introduced for a six-month trial period at the end of October, however it has now been deferred until January 2021.

Councillors agreed to defer the trial until the beginning of next year at a meeting of the south east area committee on Monday.

A “compromise” motion proposed by Labour councillor Dermot Lacey to reduce the trial to four months beginning in January was defeated.

However, a report by Dublin City Council in response to the motion agreeing to delay the cycle path trial until January was approved by councillors.

Cllr Lacey said while his “compromise” motion had been voted down, the council had agreed to further consultation with residents, as well as groups in favour of the proposal, such as the Dublin Cycling Campaign.

The local authority committed to revise the proposed scheme to take account of submissions on the plan received in recent weeks.

It also committed to provide “a more comprehensive traffic management plan around the Sandymount area to show how the trial of the cycle route is proposed to be managed”.

A council spokesman said it had received more than 2,500 submissions on the proposed cycle path.

The local authority had agreed to form a “consultative committee with interested parties including local resident groups, chaired by the Lord Mayor”, the spokesman said.

Paddy McCartan, Fine Gael councillor for the Pembroke area, said Sandymount residents’ main concern was the knock-on effects of the changes on traffic. “The fear is this displaced traffic will end up going down narrow parks and roads in Sandymount,” he said.

Locals were particularly concerned about lorries and heavy goods vehicles that had used the road to travel north to the Tom Clarke Bridge would now be pushed onto smaller roads in the neighbourhood, he said.