Why is my local buzzard single? Readers’ nature queries answered 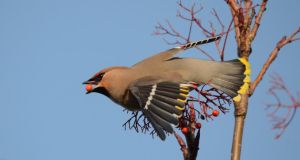 Eyes on nature: the waxwing that Liam Kane photographed in Lucan in January 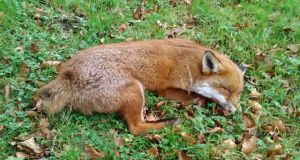 Eyes on nature: the dead fox that Anne Ryan saw in a field near Enniscorthy 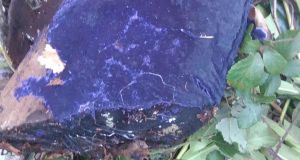 I’m sending you a photograph of cobalt crust fungus on a beech cut four years ago in southeast Galway. It is rare in Ireland.
Mark Carlin
Cloonmanagh, Co Galway

I came across a dead ash branch with deep-blue and purple colouring. It has the appearance of a lichen.
Jim Waldron
Athleague, Co Roscommon

Cobalt crust fungus is considered rare in this country. There are three reports in the biological records, two in west Cork and one in west Limerick.

I’m sending a photograph I took of a waxwing in Lucan in mid-January.
Liam Kane
Blanchardstown, Dublin

Unusually large numbers of waxwings have been seen this year. They come in search of food when the berry harvest is eaten in their home territory of Scandinavia.

There has been a single buzzard in our fields for the past six months. We have never seen a second one. Will she or he find a partner before the mating season?
Brigid Flanagan
Dromiskin, Co Louth

That depends on when it was hatched. Buzzards do not mate until two, three or four years after they acquire adult feathers.

A blackcap visited my garden in mid-January and stayed for quite a while. Is it unusual to see this bird here at this time of the winter?
Michael O’Brien
Carrigart, Co Donegal

Male blackcaps can arrive as early as January, before the arrival of the female.

I came across a dead fox in a field by the road near Enniscorthy. His tail seems to have been cut off.
Anne Ryan
Enniscorthy, Co Wexford