Michael Viney: the mystery of the Irish ‘Scots’ pine 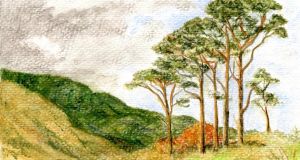 Habitues of this column will recognise its occasional fancy for scientific words that roll both round the mind and off the tongue. “Archaeophyte” is one of those, and also “neophyte” when it doesn’t mean only what one supposed it did.

Both are botanical terms, since phyte means plant, and these are two classes of plants, considered “ancient” and “new”. Archaeophytes are species brought into a geographical region, such as Ireland, before 1500 AD and neophytes are those introduced afterwards and warranting lesser respect (the Oxford dictionary offers, first, “a person who is new to a subject, skill or belief”, fitting current persons in the news).

Why before 1500? That’s rounded off from 1492, when Columbus discovered the New World and species began to travel back and forth, through colonisation and trade, in what’s called “the Columbian Exchange”.

It can seem a bit arbitrary, but that’s botanical history. And a new all-Ireland Red List assessing threats to plant species for environment agencies North and South, deals only with those of impeccable lineage. Alexanders, Smyrnium olusatrum, growing wild outside my window, is an archaeophyte, a Middle East herb brought in by the early monks. Fuchsia, in the hedge above, is a neophyte garden shrub from South America.

The first plant Red List was published by the Wildlife Service 30 years ago – a friendly little paperback, offering common, as well as scientific, names for the species, some good colour photographs, and readable profiles of the plants. Perhaps something similar is eventually planned for the new Red List, but it has emerged from the National Parks and Wildlife Service as a trade-only guide full of Latin plant names. It may, however, be patiently explored by the wildflower enthusiast with the help of Webb’s An Irish Flora, itself quite a fistful.

A lot has changed in 30 years, as land-use, drainage, urbanisation, tourism, recreation have reduced or modified Ireland’s natural habitats. But with this change has also come an intense level of scrutiny by both professional and amateur botanists.

The new Red Data list looks at 1,047 species and finds about 100 in any sort of danger, 20 of them critically so, leaving almost three-quarters “of least concern”. It also declares 15 species now regionally extinct, gone from trampled sand-dunes and beaches, from farmland where ancient “weeds” have been eradicated, from overgrazed hills and cutover bogs, from river banks carved for marinas.

The “critically endangered” species are often reduced to one or two small colonies, or even a single clump. The golden-flowered Irish fleabane, Inula salicina, is at a single flourish on the shores of Lough Derg, and the common rockrose, Helianthemum nummularium, is down to eight plants on a few square metres of limestone pavement in Co Donegal.

Such wildlfowers have shrunk into remnants and rarity over centuries of man-made change. One of those historically abundant, but long thought extinct, is the loftiest Irish native, the so-called “Scots” pine, Pinus sylvestris.

The majesty of this conifer can be felt before the mighty, glowing trunk that rises at the heart of the Ceide Fields centre in north Mayo. More than 4,000 years old, it was unearthed from nearby bogland cleared by Neolithic cattle farmers. Countless generations of turf-cutters have since struck the spongy red bones of “bog deal” at the deepest spit of peat.

The great decline of these trees in Ireland began as climate changed with the post-glacial rise in sea level and peat began to grow around their trunks. Between that and forest clearance for farming, building and firewood, the pines had seemingly disappeared by around 1600. Those that decorate the shores and islands of some western lakes are later “neophyte” plantings, as in those at Doolough, just over the hill, in my drawing.

A wide acceptance that the native pine had been altogether lost has been challenged by many botanists but its extinction is now disproved.

A remote and difficult corner of the limestone Burren is named Rockforest, mainly for its jumble of large glacial boulders. Among them, as naturalist Gordon D’Arcy describes – and paints – in his new book, The Breathing Burren, grow “a few dozen gnarled pines sporting small cones and short needles. In their stunted form, noticeably different from their tall Inverness counterparts, they convey an impression of ancientness.”

Evidence for the species’ persistence comes from pollen in a core drilled 75cm deep in a nearby swamp by Alwynne McGeever and Professor Fraser Mitchell of Trinity College Dublin. It showed the point at which the pines declined, in common with those across the island, but then a subsequent recovery. Rockforest, they conclude, is a “microrefugium” for the trees that has “persisted right up to the present day, independent of introduction by human agency”. (read “Redefining the natural range of Scots pine . . .” in the Journal of Biogeography, 2016).