Cans, bottles or on tap: What's the most eco-friendly?

One Change: Shipping and packaging a big concern when considering environmental cost of alcohol 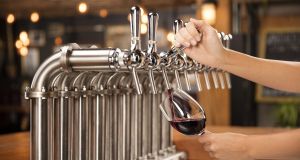 It is worth asking whether wine is served on tap before ordering by the glass. Photograph: Gregory Geipel/iStock/Getty Images

Our warming planet is already starting to make changes to what we eat and drink – and how they are produced. Take wine, for example. Rising temperatures and erratic weather patterns have now made some grape varieties unsuitable for growing in traditional wine-making regions of Europe. In Australia, meanwhile, the prolonged bushfires in recent months have caused serious damage to the Adelaide Hills wineries, halting production.

As for beer, Ireland’s most popular alcoholic drink, hop production has come under strain in some countries, with breweries having to opt for alternatives. In 2016, Australia’s Galaxy hop crop was devastated due to a severe hailstorm, while changing weather has increased irrigation demands in the Hallertau hop-growing regions of Germany.

If you’re picking up a bottle of wine from New Zealand or California this weekend, it’s worth thinking about the distance that bottle has had to travel. Shipping is big issue when considering the environmental cost of drinking alcohol. Opting for wine from Europe is the more sustainable option for Irish consumers, but it depends on how it’s been transported. Bulk importing of wine – which is then bottled or packaged on arrival – is so much better in terms of emissions, no matter what the distance.

This information is not usually available to consumers browsing the wine aisle, though you’d hope this will start to change as more awareness grows. It’s good to see some restaurants and bars are switching to kegged or boxed wine, which does not affect freshness or quality but hugely reduces on packaging, such as bottles, corks, foil and labels. It is worth enquiring about the next time you order wine by the glass.

In the world of beer, cans are generally considered more environmentally friendly than bottles, largely because of their weight – they’re lighter to transport and so generate less carbon emissions, and are infinitely recyclable. There is a bit of a debate around what is more sustainable when it comes to steel or plastic kegs. While steel kegs can be reused, they do need to be washed with a lot of water and strong chemicals; plastic kegs on the other hand can be recycled and are lighter to transport.

Refrigeration is another tricky issue when it comes to beer, however, which uses up a lot of energy during transportation and shop storage. If you’re looking for the most environmentally-friendly way to have a drink, ask what they have on tap (including wine), and opt for something made locally like one of the many craft beers or gins and whiskeys.