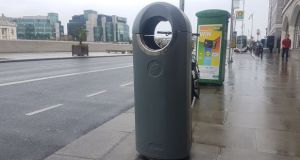 A recent trial by Dublin City Council to find out whether pedestrians will recycle on-the-go if offered segregated on-street bins appears to have come up with an answer. No, they won’t.

The council set up segregated litter bins at two locations in the city centre, Wolfe Tone Square and South King Street. Each one contained three compartments: paper, plastic and cans. The council wanted to see whether pedestrians would throw their litter in the correct compartment.

“Overall the results were disappointing with high levels of contamination present and low usage of the bins generally on the date of the study,” said Dublin City Council executive environmental scientific officer Fionnghuala Ryan.

Traditionally Dublin City Council provides litter bins where all waste is mixed together. Then later, at a depot, some of the recyclable material is plucked out and sent elsewhere.

The segregated bin study suggests Dubliners are happy to continue treating all waste equally. “A high level of contamination was encountered upon assessing the material deposited and also some evidence that the bins had been used to dispose of household waste,” the report, which will be before conucillors today, noted.

The current bête noire of municipal waste collection – the disposable coffee cup – also made its unwelcome presence felt, particularly in the paper compartment of South King Street bin. “Probably in the mistaken belief that they were recyclable,” the report said.

Over in Wolfetone Square, all but one of the five bags collected and examined from the segregated bin was found to be contaminated by varying degrees with incorrect material.

The council suggested a single bin accepting all recyclable materials may have more success than one with varied openings for different types of recyclable materials. So that’s the next step. “It is proposed to carry out a trial of a single recycling receptacle alongside a general waste bin, replicating the household bin system to assess whether this provides better results,” said Ms Ryan

“This should be done in conjunction with an assessment of whether separated waste could be managed from street to recycling facility to avoid co mingling of waste as current city centre depot configurations cannot easily accommodate separated waste streams.”