Environmentalism must be fuelled by passion and empathy, argues Andreas Weber 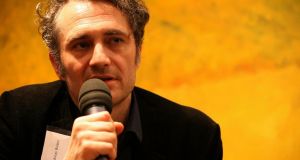 Dr Andreas Weber: mingles his vast scientific knowledge with a poetic turn of phrase which draws readers into connections with the natural world.

Every now and again, an academic, an entrepreneur or even an economist comes along to challenge conventional thinking. German biologist, eco-philosopher and author Dr Andreas Weber is in this mould. He came to Dublin in July to speak about how only when science, politics and economics put the living world at their heart will it become truly sustainable.

Putting the planet at the heart of policy might not sound so groundbreaking but the key is in the word “heart”, because Weber argues that dealing with species decline and habitat destruction in a rational way will not bring about a deeply sustainable world.

“We are in the sixth wave of extinction [all previous waves of extinction pre-date human life on this planet] and if we focus on the death of species, it will become a self-fulfilling prophecy,” he says.

Like many scientists, Weber says climate change has proved that humans are “inescapably connected to Earth and its systems”. “Traces of pesticides, nuclear fallout and nitrogen fertiliser can be found in the Arctic ice crystals and in the soils of the Amazon,” he says.

However, he suggests that this so-called Anthropocene era – in which human beings dominate the biosphere – calls for a new approach which embraces the living processes of the world in “mutually transforming relationships”.

Weber is at his most eloquent – and convincing – when he shares stories about his personal interaction with other creatures either in his native city of Berlin or on his travels throughout the world.

At his talk to the Green Foundation Ireland at the Irish School of Ecumenics at Trinity College Dublin, he shared an encounter with nightingale song and honeysuckle blossoms on a quiet street in a downtrodden part of Berlin. “I stood there for a moment in the presence of other selves totally able to be themselves – the perfume, the sound, the colour – and in that moment, I knew I had found my summer and it had found me,” he says.

At another event, Weber shared an encounter with one of the last remaining wolves in Ethiopia. While there, he explained how he sat, watched and looked into the eyes of the wolf, whom he felt looked right back into his eyes, co-witnessing the loss [of this species] with him. “We need these kinds of experiences. There are part of the essence of being alive,” he says.

As with much philosophical debate, Weber’s writings are full of references to previous philosophical tenets. He argues that it’s time to move beyond the dualistic thinking of the Enlightenment, which separates mind and body, and instead embrace a mind/body connection with the natural world in all its fragility and strength. This mutual relationship with birds, animals, flowers and even stones, he defines as “enlivenment”.

In his writings, Weber mingles his vast scientific knowledge with a poetic turn of phrase which draws readers into connections with the natural world.     “There are always two sides – the material, body and empirical side which science is fascinated with and the personal, emotional, subjective, existential experiences. We can’t reduce the process of mutual relationships to only one side,” he says.

And in this vein, Weber argues there is a paradigm shift currently occurring in biology on a par with the theoretical shift that occurred when, 100 years ago, modern physics [quantum physics and the theory of relativity] realised that any observer is entangled with the system being observed.

He argues that Darwinism and neo-Darwinism, with its emphasis on scarcity, competition, efficiency and survival has dominated biology up until recently.  But, now, a new approach to biology (explored in bio-semiotics, cognition and developmental biology for example) embraces an interconnectedness where both the first and third person experiences matter.

“Life is experiencing how it is to be matter and to be alive is always about being matter. Our whole reality – what we can know – is based on feelings and participating with others,” he says. For example, we now know that we share our bodies with a multitude of bacteria. Similarly, we share the air we breathe into our lungs with other living organisms at all times.

So, Weber argues that we need a new “policy of life” so that sustainability no longer means protecting the other but cultivating ourselves. For this deep sustainability to become a reality, Weber says we need a global ecological agriculture which enhances biodiversity and human existential experiences. We also need an economy guided by an economic exchange in the shared “household” of the biosphere, a biology that understands organisms not only as ecosystem-service providers but also creative subjects that humans are a metabolic part of and an education which teaches the art of living and connection.

Speaking at the aforementioned event in Dublin, Dr Cathriona Russell, assistant professor of theology at Trinity College Dublin said that to “reorient ourselves towards what we love may not be enough to prevent [environmental] destruction”. “In our current era of post-fact, post-truth, it is the legal and moral obligations where environmental ethics will hold the line. We are forced to revisit what it is to be a human agent in the context of our depleted environment,” says Russell.

Dr John Feehan, a geologist, botanist and environmental philosopher, who also spoke at the Dublin conference argues that we have a capacity to have an “alert presence” with the natural world. “The human journey of understanding is a spiritual journey in parallel with every plant and animal – whose presence in our lives we are largely blind to.” Feehan encourages us “to enrich our encounter with place where our feet walk every day”.

Speaking to The Irish Times after Andreas Weber’s talk, Prof Pat Brereton, lecturer in the school of communications at Dublin City University and author of Environmental Ethics and Film, argues that if we don’t have a love of nature,  we can’t connect with it and protect it.

“I think we all need to have the celebratory and utopian moments in nature that Weber talks about. We need new ways of visualising and communicating about the environment to keep it in the public imagination because [ultimately] if we don’t have a planet, we won’t survive.”